One of the wonderful advantages of working for Hostelling International, is that they’re very keen to encourage their staff to get out and about in the local area. Not just trying the nearby restaurants, but by getting out into the country and really experiencing the country.

So there was ten of us heading out, but the main crew had already left, so it was myself and two girls hiking the wilds of Alberta, fighting off bears and struggling through blizzards. In actual fact, the trail we were following was mostly alongside a groomed crosscountry ski track, so it was easy to follow, and pretty easy gradients as well, although there were a couple spots where we used the ‘uphill mode’ on our snowshoes. The trail also follows the power lines for an awful lot of the hike, not the most scenic thing to walk next to. The high trees on both sides blocked much of the view as well which meant a lot of the trip was a bit on the dull side.

Once across the border and into BC the trail aims downhill, still no prettier, but definitely a lot nicer on the legs. It’s about 9kms from the car park in Peter Lougheed Provincial Park, across the provincial border to the Elk Lakes Wilderness Hut, but while it would be an easy hike under three hours in summer, the snow, and snowshoes really take their toll, pushing it up to around 3.30. Once we arrived, a quick catch up with the others, before making the walk out to the lake. This trail was a lot more satisfying, only 20 minutes each way and a gorgeous lake to look at when you reach the end (actually, you can go much further, but it was getting dark.) There was an awesome echo that bounced around the mountains, and the partially melted lake made for some stunning photos. 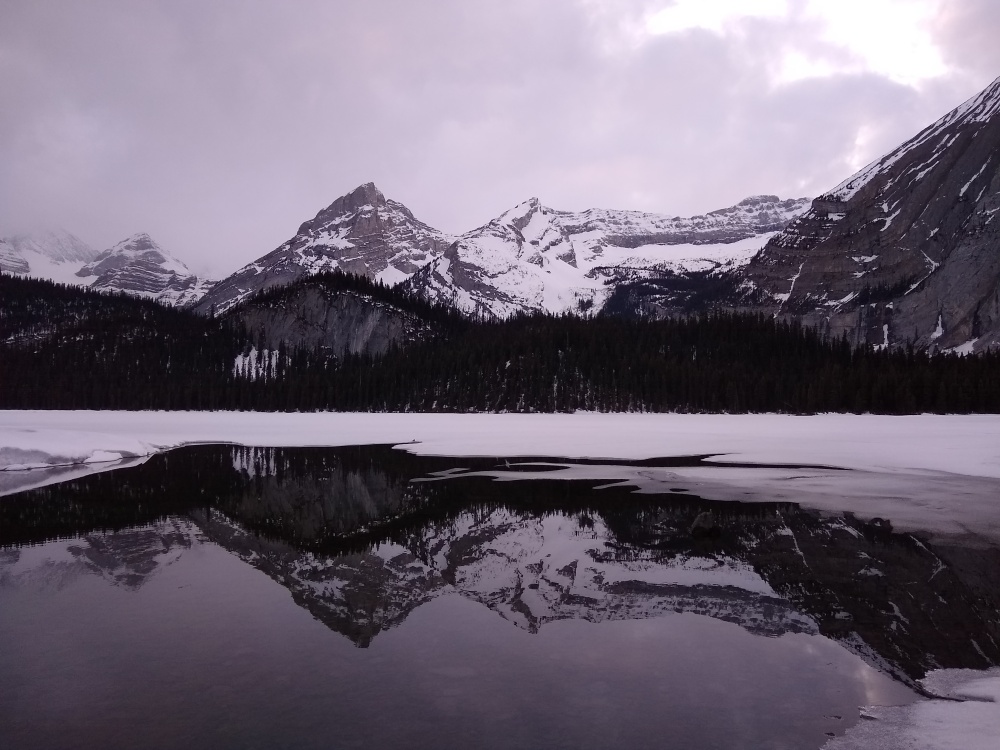 That night we cooked and drank in the cabin, with no electricity the lights are gas powered, and the whole hut is heated by a single wood stove. It was surprisingly warm, and bright, the food was easy enough to cook and we all had a great night. I was impressed with the amount of alcohol some people had managed to carry out, although I was laughing the next morning as I’d concentrated on water instead – 5 liters was a little overkill though. By the time we went to bed it was well past midnight, but the bedding was adequate and comfortable, thin foam mattresses are more than enough for me. The lack of pillows left a few people suffering as we had brought sleeping bags, but not thought about our heads. Thankfully I figured out a good way to make a pillow from a hoodie a few years ago (fold it long ways until it is the width of the hood, then roll it up and wrap the hood around the whole thing!) The trouble was that we’d been piling wood into the stove all night, and the upstairs sleeping area was incredibly hot. Next time we’ll pace it out a bit better.

The next day, after eggs and bacon for breakfast, we all marched back towards Alberta, and our vehicles. But this time I had a treat in store – on the lake walk I had found a ‘snow boogie‘ a simple but effective sled. So as we climbed it was strapped to my back, but on the downhills, of which there were many, we rode! The sled was hard to control, but with the groomed crosscountry ski trails, which happen to be two parallel grooves in the snow, it was easy to ‘lock in’ and glide comfortably for some distance. The various gradients, and a decent amount of testosterone fueled males made it quite an adventure as we took it in turns. It certainly made the hike more entertaining, and probably would’ve been a lot quick if we’d all had them.

So, my advice is if you’re heading out on a snowshoe trip, and fancy making it a bit more exciting, take a snow boogie with you!