As winter had been set in for a while, but starting to come to end, it seemed like a good time to re-visit Jasper, and make the most of the winter activities. If you’d like to know what I got up to on my first visit, check it out here.

We had a firm destination for this trip, skipping all of the stops along the Icefield Parkway (nearly everything is closed or frozen over anyway) we went all the way up, and headed straight into town for some food. We had left later in the day having worked, so food and bed were our priorities. Although we did manage to find some time to try a new board game. It turns out I’m quite good at Carcassone. We made a glorious breakfast of eggs and bacon in the morning and they struck out for our main goal – Maligne Canyon.

This canyon is pretty cool in summer, but in winter you can walk down to the end, and then walk back through the canyon, walking on the ice past frozen waterfalls and getting an epic view from the bottom of the creek. So that’s what we did. I was under prepared (as always) and was relying on an old pair of crampons that were left in my friends car. This didn’t go so well, the first simply fell of instantly, while the second was loose. But still I persevered on with one grippy foot and one slippy. I did surprisingly well, but I definitely wouldn’t recommend it, to anyone, ever. 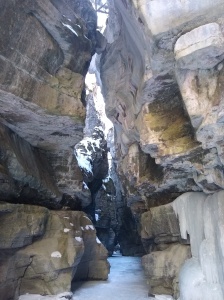 We walked along the top of the walls of the canyon until they reached down close enough for us to make our way onto the ice and work our way back upstream again. Even with crampons, and better ones than mine would have been even new, the girls I was with did struggle a bit on sections, and then we reached the puddle. The puddle was a serious issue for several people, but not for me.

Amazingly my boots were the only ones high enough, and fully waterproof that allowed me to cross the water, and reach the most impressive part of the canyon. Before the puddle the walls had been quite far apart, but on the far side it tightened up significantly, and made some really stunning scenes. A little further along was a group of ice climbers scaling the walls – having some trouble though, as apparently the ice was too solid due to the low temperatures that day.

Further on again the canyon really tightened up, never to the point where it was a squeeze to get through, but enough to make it really interesting, the patterns in the rock where the years of water flowing through had carved big bowls, little islands and swirls all around for about twenty meters above my head. This section had only me in it, and being able to explore in the eerie silence really was a cool experience. I didn’t want to keep the girls waiting too long though, and turned to head back once I hit an impassable frozen waterfall. On my way back, I realised my crampon had torn, the rubber giving way and the whole thing slipping back on my foot, barely giving any grip at all. It was a miracle that I managed to get all the way back without stacking it. I even hopped a fence a little higher up that access another snowier section of the canyon. By the time we finished though, the crampon had had it. Make sure you take ones that will not give up on you – no rubber! 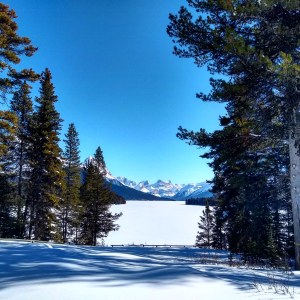 It was then time to grab some lunch, so we headed down to Maligne Lake, as it was so near. Not much to see other a whole lot of fluffy frozen water sitting on top of some crystalline frozen water. The cafe was unsurprisingly closed, but we had planned for that, and enjoyed our sandwiches in the car. Then we went to find a nice coffee back in Jasper town.

Over said coffee, we discussed the rest of the day, and decided to really wear ourselves out and head out to the Valley of the Five Lakes, a nice easy and nearby hike. Of course the lakes were snowed over, but we had a pleasant stroll through the woods and found some more of Canadas Red Chairs.

Another good feed, another game of Carcassone and we were ready for bed. More eggs in the morning, and then straight off to Marmot Basin, the main ski area of Jasper. It’s a good riding area, all nestled in and around the one main bowl. I was surprised how much fresh snow there was to be found even without much falling in the days before we arrived. While they didn’t have much park stuff there was enough to play around on and keep me entertained. The hill does have a couple really slow chairs, so watch out where you’re heading and make sure the snow up there is worth it before hopping on a slow one. That said the main chairs are great and access a good sized area, so I had a nice day exploring and testing the waters. I’d like to head up a little earlier in the season and try out some of the other sections, and I’d be happy spending a few days up there.

After a bite to eat, it was time to race back to Banff, this time it was me at the wheel, but thankfully the return journey flew by and we were home and safe before too long. I was again impressed by Jasper, and each time I go it becomes a bigger temptation to move and really get my teeth into both the town, and the national park. But before I do that, I have a few more things to check off the list here in Banff.