So probably the best part of the Go Pass, was that if you buy the 3 day (or more) then you get entrance to Universal Studios included as well. Believe it or not, but I haven’t been to many theme parks, so I was not going to miss this chance!

Before that though, we thought a trip to the Warner Brothers Studios made sense. I hadn’t booked, but my new friend had – luckily it was low enough season that they managed to squeeze me in, although we actually got moved back a tour or two. I’m glad of some flexibility there. The tour was good as well, and although I don’t watch enough TV to get excited about a lot of the things we saw, I still had a good time, and got to nerd out about a few things. 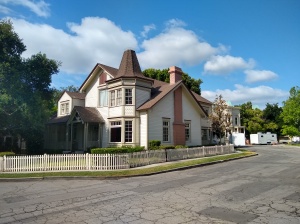 I liked driving around the external lots, the fake buildings and houses, and seeing some of the clever ways they are put together. Houses that have two fronts, so they can pretend to be different buildings, buildings that are completely hollow, or only a meter deep. There’s a nice town square with a park, and a tree where all the leaves have been zip-tied back on, shops that are coffee houses one week, and a pet store the next. It’s amazing how from one angle you can make a building look like suburban middle America, while another looks like a city centre.

As well as the outside lots, they showed us around some of their galleries, including costumes and props for recent movies including Aquaman, Wonder Woman, and the Harry Potter series – The Harry Potter area was the most popular with my group that’s for sure. There’s an automobile section as well, filled exclusively with Batman’s vehicles, including the ‘Tumbler‘ from the Dark Knight series.

I was a fan of this section. Next up was a collection of random bits and pieces from various shows, some props, some costumes, and the famous ‘Central Perk‘ set from Friends. 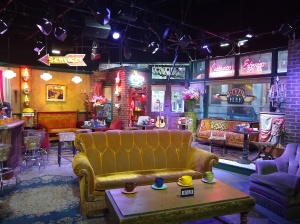 All the original decoration, just in a new room. You can take a seat on the sofa and get a picture pretending to drink a coffee as well, if you’re into that sort of thing. Overall a pretty good little tour, and as it’s included in the GO Pass, a great deal for us.

So from there, a quick Uber got us to Universal Studios and my first internationally famous theme park. Well, without going into details on everything we did, I can tell you we hit all the rides, and saw the shows. The special effects show was interesting, but not really worth the wait times, but the Waterworld show was pretty cool. 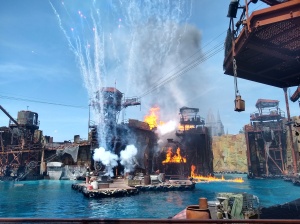 A lot of pyrotechnics and not much acting but fun to watch. I was really hoping for a back-flip on one of the jet skis, but sadly not. There’s a weird push towards virtual rides, with the Simpsons ride, and one of the others being this new style. It’s a room, with a screen and a platform you sit on that make it feel like you’re on a crazy ride – it does allow you to fly through the world of the Simpsons, or whatever theme they have, but it’s no substitute to flying through the air on a real roller coaster. There’s also the ‘walking ride’ in the style of the Walking Dead TV show, this one I found really disappointing.

It’s like a horror house, but while most of those limit the amount of people going through, this one barely separates the groups, so you see the actor/zombies jumping out at the people in front, and it really has no immersion whatsoever. It wouldn’t be a big deal but the queue was probably the longest of the day, so felt like a waste of time.

The most popular/famous part of the park is the studio tour, unlike the Warner Bros tour, this is more like a ride, as you stay on the giant golf-cart train the whole time. It takes you past various outdoor sets, some of which are from movies including War of the Worlds, Jaws and Bates Motel, while plenty more are just generic buildings and settings.

They’ve got a big area so there’s enough there to have cities, towns, villages, a lake, and some forest areas as well. They list of plenty of movies and shows that have been filmed there, although a lot of the set pieces are from quite a long time ago, and look a bit dated as well. They even have live actors playing out scenes on repeat as the train goes by. I feel bad for the guy out in the sun all day pretending to be Norman Bates. There’s also a couple of those virtual rides along the way – the train goes into a giant shed, then you put on the 3d glasses and get rocked around as a movie plays on the screens on either side of you. It’s well done, but feels very Hollywood AKA fake. I definitely enjoyed the other studio tours more as it felt like you were actually getting to see something real, rather than a pre-scripted cheesy tour. I did enjoy the real like special effects section, but mostly thanks to repeated watchings of Beverly Hills Cop, where they head into the park, and even into that ride.

My friend left towards the end of the day, so I got to make use of the singles lines, which allowed my to check off the last few rides in the park before heading back home. Overall, I was underwhelmed by the park, the roller-coasters were short and not too spectacular and there was a lot of virtual attractions that could’ve been done at home with a rumble chair and a VR headset. I’m glad I got to go, but there’s no way I’d be paying full price to go again. Thanks again to the GO Pass for adding on so many options.