So most cities have some sort of multi attraction pass that gets you into a whole bunch of sites and museums. Often these are run by the city, and just cover the government run things, museums and historic sites mostly, but some cities have other cards run by an external company who try to get as many attractions in as possible to help sell the card. The LA one is really good, the GO Card, you can get a cheaper deal on it through Groupon as well, and it opens up a lot of fun things, including Universal, Warner Brothers and Sony Studios, a couple of cheesy bus tours, a hop-on hop-off bus and so much more. So I picked it up, figured out how much I could do, and well, tried to do it all!

The first activity was a Celebrity Homes tour up to Malibu. Now if you know me at all, you’re probably surprised that I did this, but I wanted to see some more of LA, and the beaches, and I couldn’t find any better way to get up the coast. So I hopped on on a rainy morning and enjoyed the view past the houses – I have to admit, this is where is disillusionment about California (specifically LA) started to kick in. Having seen the shacks and slums that were scattered around near Elysian Park it was horrifying to see the LA Elite is so uncaring that they would spend millions of dollars on their homes, unnecessary and gaudy, but admittedly luxurious. It seems that they can blind themselves to the suffering of so many, right on their own doorstep to enhance their own lifestyles. I’m not saying they should be living in basic accommodation, but to be spending so much money on making their home so much more lavish than needed seem cruel. Still the tour was interesting enough, and our guide was kind enough to take us up to a viewpoint on the way back – I think he could tell the movie homes weren’t really why we were there. He did also tell us not to mention the viewpoint, as it’s not supposed to be on the tour, but so few people read this, I think he’ll be okay.

I met a girl on that tour who was also using the GO Card, so we teamed up and started to explore together. Jumping onto the metro we headed up to Downtown to head up the OUE Skyspace, another big tower with an observation deck. I’ve been up a lot of these, but I do find the views pretty cool – I like the way cities are structured. We also got a free tour while up there, they run every hour but no one else was waiting, so it was private for the two of us. The views were pretty rad, and the guy had a lot of information about the city, the improvement plans for the Olympics, the extensions on the metro, and what the numbers on the roofs are for. After a bite to eat we headed around to Hollywood, one of the most overwhelmingly touristy places I have ever seen. Crowds everywhere, tour buses going by non-stop and grifters on every corner. Saw a lot of buskers warming up, but no-one seemed to actually be putting on a show. 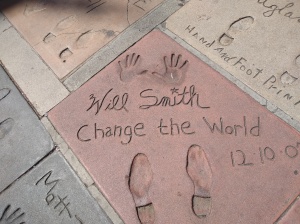 In Hollywood there are a lot of little bits and pieces to see and do, the best ones for us were the theatre tours, the Dolby and the Chinese were both included, so that was a no brainer. These are not traditional theatres, but cinemas built back when cinema was still new, the ‘golden age of Hollywood’ so the theatres had to be big and glamorous. The Chinese Theatre is very ornate, and includes a lot of cool costumes and props inside it’s walls. You don’t really need to do the tour, just buy a movie ticket and you’re free to explore. We got to watch some of the previews of the movie that was about to start, and the screen is very impressive. I can imagine it would be a magical place to watch a big premiere.

While it isn’t actually Chinese, it is themed and decorated that way, and the decor is incredibly detailed and well maintained. Outside they’ve had paving stones with hand and foot prints for many of the stars that have had premieres there, these days only the biggest stars get a slab, but we did get to see the practice goes from the big names of the last Avengers movie – Robert Downy Junior, Chris Hemsworth, Chris Evans and Scarlet Johansen – just the practice blocks though, as the official ones were being prepped to go into the courtyard. 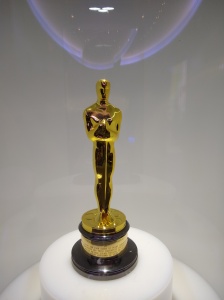 The Dolby on the other hand is very luxurious in the lobby, but the main theatre room is rather traditional – although this is also a theatre in the more traditional sense. It’s where they film shows like the X Factor and other performance based TV shows, and of course, the Oscars awards ceremony is hosted there. We got to see some of the VIP areas, and the passageways that lead the winners off to the contract signing (so they can’t sell the Oscar they just won), plus a tonne of memorabilia, posters, and photos of celebs past and present.

Outside again, we found another homes tour, but this one to the Hollywood Hills. I had been researching, but without a car it’s tricky, only the tours will get you up there. There was a bit of time before that departed so we headed into the Madame Tussaud’s, the wax museum that you find all around the world. I’ve never actually gone to one, so this worked out pretty nicely, and it also made me glad that I’d never worried about going to one before. It’s weird and creepy and pretty boring. Wandering through models of famous people and taking selfies with residents of the uncanny valley is fun for a little while, but nothing that’s going to blow any minds.

So the tour, this time featuring a super enthusiastic tour guide, and some beautifully stereotypical american tourists. Again, this tour really hammered home the point about the rich poor disparity. Seeing these crazy big mansions with swimming pools that cost them $100,000 dollars so they can have a glass bottom. Just feels like a big snub at the poor people that these houses overlook, the idea of having so much money that you can have drinks delivered to you in your infinity pool while staring out over a city where people are dying on a daily basis due to the poor quality social system in the city. Sorry to be so political, but it hit me harder here than it did in any of the ‘third world‘ countries I’ve been to because this is America, supposedly a world leader and also because of the pure extravagance of the rich in these areas. The tour took us through plenty of cool spots with great views across the city, and over the other side of the hill as well, towards Universal Studios and plenty more. The hills are nice, and the houses are impressive, although personally I think the whole place would be nicer without the mansions. Coming back down, we came through Beverly Hills and did a quick pass through Rodeo Drive, a place I don’t think I’ll ever be shopping! It’s a nice area though, and if LA was a little easier to get around I would’ve come back up here to take a walk, although in all honesty I was more interested in the next spot, the Sunset Strip. It’s famous for its live music, and for its dive bars. It’s where so much of my favourite music came up, and has influenced so many artists through the years. A night out here would be like a walk through history, and a great musical history for someone who likes metal and punk like myself.

After that busy day, some food and bed were pretty much all I could manage.