One of the great things about working in the tourism industry is low seasons. Plenty of holiday time, and it’s usually a pretty cheap time to travel. I managed to get a break away from Canada just before Spring Break in the USA, and did my usual search to find the cheapest place I could get to that would tick a box and scratch an itch. Of course, one destination is no way to travel, so two islands were lined up, Maui and Hawaii (the Big Island).

I like to do my research before I go, but there’s only so much the internet can tell you about a place. So like a fool I have no idea how to get from the airport to my hostel without a car (or a taxi), I thought I had it right, waited for the bus, but was confused by the driver telling me that he wasn’t going where I needed (he was, but I needed to change part way). I gave up and got an Uber. The hostel was pretty nice, surprisingly full of French Canadians who had taken over most of the social areas, but I found some friendly English speakers and started really making some plans. This is what I really appreciate about hostels, the ability to find new friends to adventure with, it’s what makes solo travel really entertaining (most of the time).

So the next morning, I hop in a truck with a ‘new friend’ and we head to the beach – can’t go to Hawaii without hitting the beach can you. I’m not much of a beach guy, I like to keep active, so I take a stroll along, past the front of a lot of big fancy hotels with their big fancy private pools, and lawns and so much more unnecessary development, and all the squabbling families and cringey couples that make up the clientele of that sort of place. The beach was real nice, and being on the South side of the island meant it had some sunshine. The whole time I was there the North was bathed in cloud with frequent rain, while the south was everything you’d want from Hawaii weather. 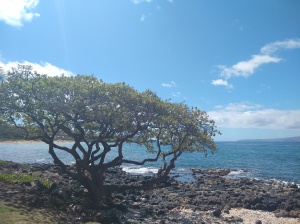 Still, a beach is a beach, and resorts are resorts, only so much to see – although I did spot a few whales out in the bay which was pretty cool – It wasn’t until later on the trip I realized how easy whale watching was. So back to the others, and time to head around the coastline for one of the others to get to his whale watching trip (I didn’t tell him I’d seen them for free already). I jumped out at the same point, and found a nice hike to do – bit frustrating that I had to walk along the highway to get to it, but so be it.

The Lahaina Pali Trail heads up and over the Kealaloloa Ridge, basically cutting the corner off the South East corner of the western chunk of the island. Pretty solid switchbacks on the way up and back down, and goes past the massive windmills that power half the island. They are impressive to be up close to, and while some people hate the look of them, I think they’ve got a certain modern style. The one thing I didn’t find up there was water, despite it raining at the top of the hill, and a thousand valleys with lush plant life, there was nothing to drink, and I’d finished my bottle a long time before I hit the peak. On the far side, the trail pops out opposite another nice beach, one with plenty of people chilling and a nice surfy vibe. What it lacked though was any bus stops, so it was time to exercise my thumb. Despite my best efforts to look like a nice friendly guy it took quite a while to catch a ride, despite the ample space to pull in and the busy traffic. One thing I can confirm after reading so much conflicting information is that hitching in Hawaii sucks. Back to the Whale Watching port where I waited for a bus, then hopped on the one with the right number, at the right stop, at the right time – but going the wrong way! One trip to Lahaina and back again (plenty of time to read) I was back at the hostel with a cheap bite to eat from the local Chinese takeaway ready to catch up with the guys I had met.

We made a few more friends that night, and the next day we had another plan – the infamous road to Hana. A ride to the airport to pick up our new car (and my new home) meant we were on our way, and it’s was time to find the first google map star. The Twin Falls, a cute little stop but nothing spectacular. The most amusing thing is that the main trail actually leads the wrong way, up to a pretty disappointing fall. So paths that go the wrong way often end up becoming the most popular, as each person has to walk it twice, they get twice as worn as the proper trail. So don’t follow the, and dip off to the left as you head in, you’ll find the much better falls, and some really cool trees as well.

Further up the road is a bit of a secret spot, no signs, but there’s plenty of cars and you’ll dive straight into the bamboo forest. This alone is pretty cool, but keep exploring and there’s a a nice river delta and (apparently) a series of waterfalls you can climb up. Although you do have to swim across the pools to get to each one further up. Not great if you’re wearing pants, and I read some nasty things about the water on the islands, so maybe it was a good thing we completely missed where we should’ve gone. It’s on google maps as Bamboo Forest Hike.

There are absolutely tonnes of stops along the road, it would be impossible to see them all in one day, so we skipped some, and just hit what we hoped were the highlights;

There’s so many that even describing them gets repetitive and a challenge. After that many it was very difficult to get excited about any more.