Nha Trang is the first of the really commercialised touristy areas we hit, but very different to the commercial areas in Thailand and Cambodia because this town is geared to Russian Tourists not Europeans. 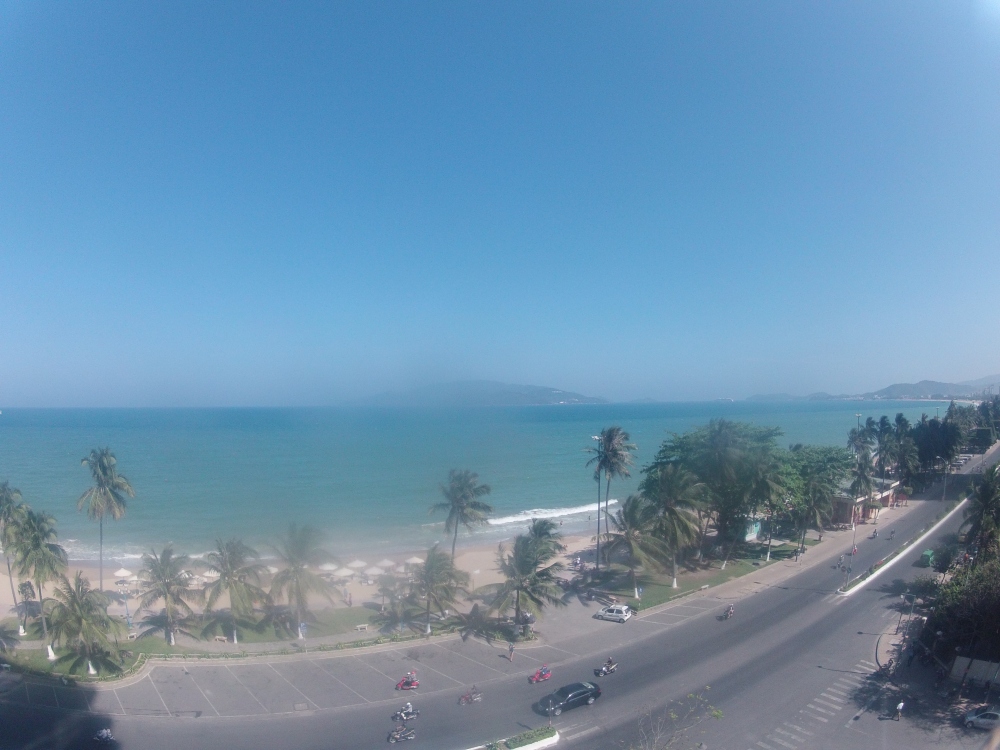 While you may not think it would be very different, seeing restaurants with names in Russian lettering, with unknown themes mixed in with the occasional English, and even rarer Vietnamese signs was a little surreal. I can only assume it’s how non-native English speakers feel as they wander around the rest of South East Asia. It also warps the travel style to be in favour of the Russian, which is resort holidays, packaged tours and expensive, high quality at every turn. The complete opposite of the western way, constantly searching for the cheapest (but still high(ish) quality) way to do everything. So, less hostels, less local places to eat and more fancy themed bars.

Arriving earlyish in the morning, we dodged the over-charging taxis, choosing to find the nearest place with wifi to google our hostel. Turns out the bus stop is right next to the main hostel area, so a short walk later we found it and dumped our bags. If you’re getting the bus in, make sure you don’t get a taxi or moto, it’s less than 1km to walk. With our shoulders a little lighter we headed out to see the town, and well, it’s pretty big and fairly nice. The beach was very windy so wasn’t much fun for sitting on, but walking along the promenade was pleasant enough, and there’s a few monuments to keep it interesting. 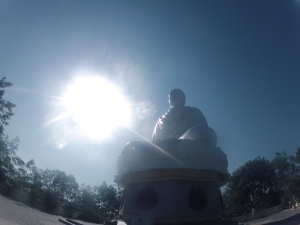 The bus system here is blissfully easy to navigate, so we explored the Po Nagar Cham Towers which are across the far side of town. Very cheap entry and a wonderful little sight, if you have a little time to kill in Nha Trang then I highly recommend it. Another good stop is the Long Son Pagoda which is also on the bus route, so long as you can get your head around where each bus actually goes. Again, pretty and cheap, and with a huge Buddha to see, at the top of the hill with excellent views it would be crazy to miss.

There’s a good couple of bars near all the hostels, the most popular being the infamous ‘Why Not?‘ bar, which has been repeated from city to city around SE Asia. Be careful of the sharks in there, they’ll play a game of table football or pool with you, let you win, then offer to play another game, but make a bet with you. This is how they make their money, so don’t fall for it, you will lose.

Next day we hit what I had been looking forward to since arriving in Vietnam, the Vinpearl amusement park. It’s situated on an island accessible to the longest over water cablecar, along with a large resort complex, think Disney Land, but a lot more Vietnamese, and no cartoon characters wandering around. Entrance isn’t cheap, but it allows unlimited access to all rides and games all day, so it’s not a bad deal. Mostly, the queues were short, but you do need to be at the ride at the right time, they cycle through, usually a short window for each ride, so timing is pretty important.

There’s also a large waterpark, which is most of the fun really. The lazy river is great if you fancy being really lazy, but the flumes they have are great fun, big fast ones, big ones with a giant halfpipe, spinning ones, and plenty on inflatables. I advise taking your flip flops (thongs/jandles) with you to climb the towers, the metal gridding really starts to hurt the feet after a while. Just throw them off the tower at the top and pick them up after. If you lose them, just buy some new ones later, not expensive in Vietnam. We spent most of the day there, and filled it happily with slides and rides. Definitely the highlight of Nha Trang.

The last day was spent just hanging out and waiting for another bus over to Hoi An.