The ‘commuter’ terminal in Maui might not be much to see, but the flight between really is. It’s not a scenic flight, but when there’s only eight of you in the plane and you’re flying right next to a volcano over perfect beaches it’s hard not to enjoy it. About twenty minutes over gorgeous blue ocean, trying to spot whales, and then we’re over the moon landscape of the lava flows on Hawaii (Big Island) and landing way too soon. 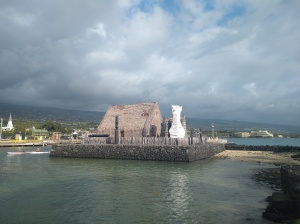 I had a couch-surfing host picking me up in the evening, so I had a bit of time to kill. I initially tried hitching out from the airport, which was a total flop, so I ended up jumping in an Uber to Kona. Kona is a definite tourist town, lots of shops and food, not much stuff for the ‘real people’ but still nice enough. For a tourist town I thought Kona had a decent amount to offer, and actually some pretty nice gear on sale as well – although I have very particular (and not necessarily good) taste in clothes. I did find a nice place to get a coffee and spent a good few hours reading, overlooking the beach and slowly enjoying my drink. Finally it was time to get whisked away to the south side of the island with my couch-surfing host.

The area is called Ocean View, and as I found out, it was sold ‘site unseen‘ to Americans in places like Chicago and the north west of the states, sold on the dream of a Hawaiian retirement property or as a good investment. You can imagine the promo photos – stunning beaches, palm trees and sunshine, and a description dripping in superlatives. But instead of tropical paradise, they got a plot, far from the coast, of volcanic rock and scrub-land. The neighbourhood was pretty bare, a few houses here and there, but with the rock base it was incredibly hard and expensive to develop on the land so even the nicest houses were still surrounded by rock – not the American dream of nice lawns and white picket fences. It looked more like something out of Mad Max than the tropical paradise you might expect. So the place I was staying was a cabin, balanced on top of the lava flow, complete with lava tunnel in the back yard, a decomposing boat and plenty of rocks! The state hasn’t yet put water or power lines in yet, but the house was well equipped, and with the old truck fetching water wasn’t the end of the world.

An early night meant an early morning, and my host was kind enough to take me up to Volcanoes National Park. I was confused at first as I thought we were driving away from the viewing area, but it turned out we were just driving around the outside of the crater to another viewing spot. The crater is absolutely massive, easily the size of a town, so the only way to get around is by driving, and due to the volcanic events of the last year even that was blocked in places. The sheer size is enough to blow you away, but then you realise you’re standing on old lava flows, climbing through tubes and over collapsed sulfur cones, and the whole area is smoking constantly, it feels like you’re on another planet. Different walks show you a variety of different volcanic events, big holes where lava has flowed out and the ground has just given way, huge piles of ash blown out from a fissure, a road cracked and broken into pieces by the shifting of the earth, and of course the giant crater itself, with different levels related to different events.

Coming back around the welcome center there’s a couple more walks to do, I did enjoy the steam rising out among the plants, and the colorful wall where the chemicals steaming out of the ground have stained the rock with their chemical make-up. This is clearly the family friendly area with lots of info boards and well marked paths. There is a limit to the walks as some of the trails disappeared along with big chunks of the rim.

Not inconvenient for me, but I can understand why people my be frustrated by this, although personally I think that visible proof that this volcano is still very much active is actually pretty exciting. One bad thing did come with the activity, there was no lava flow to go see. For a long time there was a permanent flow of lava into the ocean on Hawaii, view-able by boat or helicopter, it was something I was prepared to really splash out on, but sadly that was not happening during the time I was there, and it’s unlikely to start until again until another volcanic event.

There’s a decent informative center, and a really nice restaurant/hotel where we ate dinner that sits right on the edge of the crater. It’s pretty cool sitting down to some food while gazing out over the incredible sights of an active volcano steaming away. After a chilled meal I helped out with some errands, and prepared for the next day. 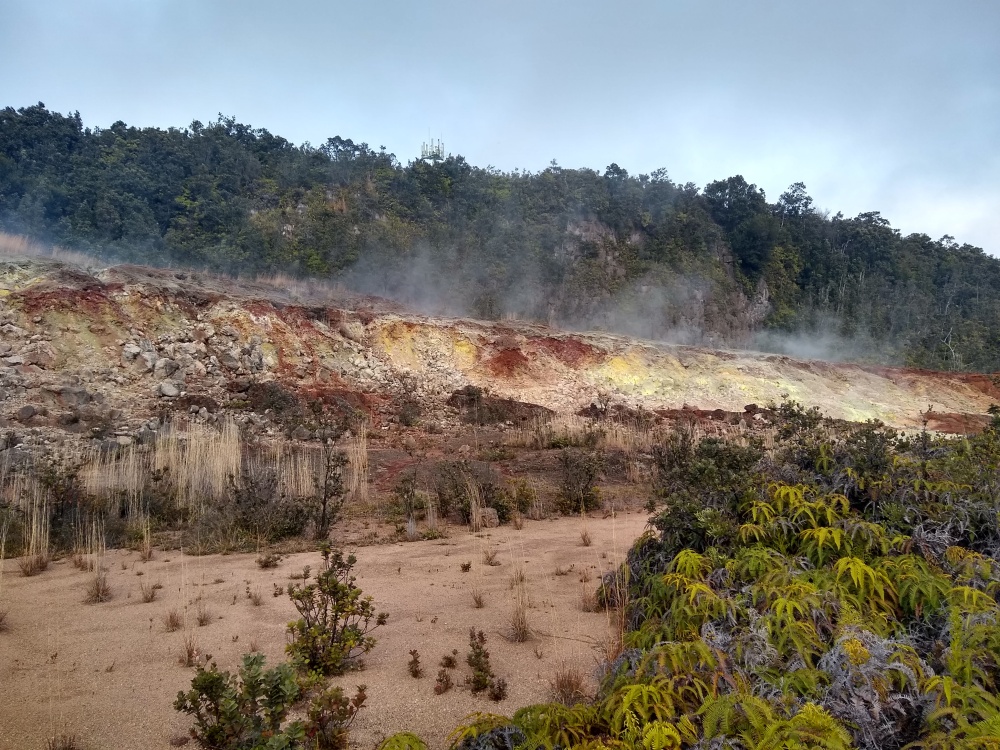