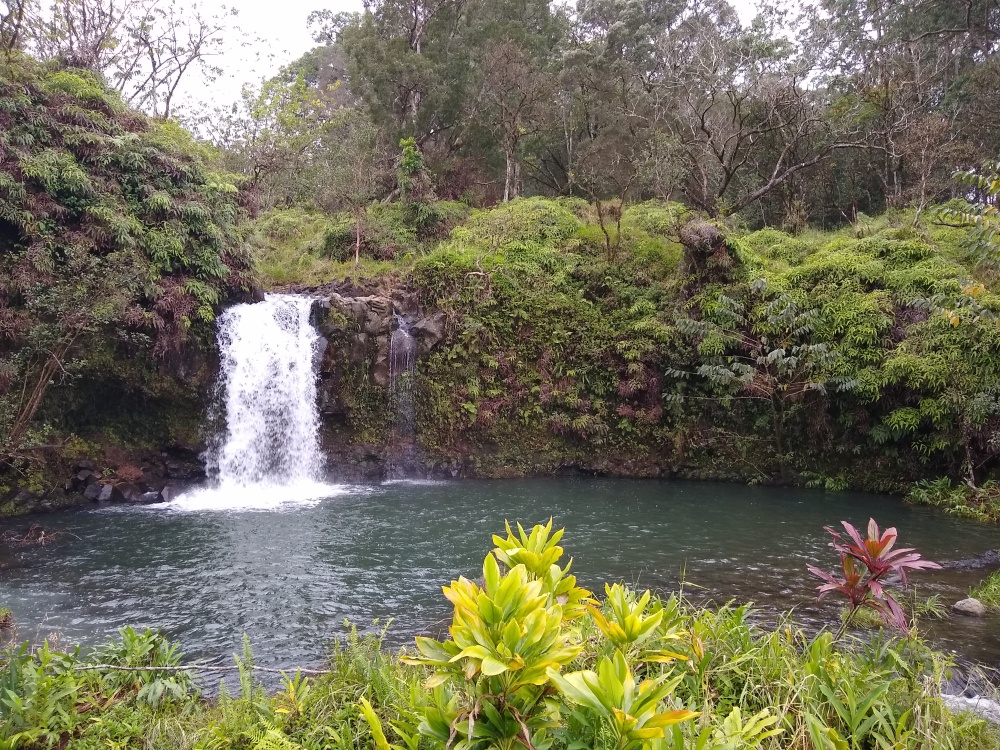 As we approached Hana there’s a little bundle of things to see. The village itself is cute, but not too exciting, so we grabbed some food at the street food stop just on the road back out of town. The food trucks here are a really good way to eat on a budget, much better value than restaurants in general, and a lot of the food is really good. Plus the surprisingly ethnically diverse population mean there’s a lot of authentic options – Thai, Chinese, Mexican and American, plus occasionally a bit of Hawaiian as well. 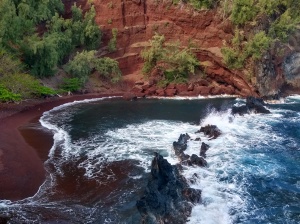 From there it was Red Beach time, and this actually really impressed me. The colour is so rich and vibrant and the beach was relatively quiet as well. There’s a slightly sketchy path that leads around the headland and down, but it is well worth it, and fine for most able-bodied adults, just keep an eye on the kids. A rock break sits about 20 metres out from the sand, stopping the big waves hitting the beach, so swimming is pretty comfortable within the bay, and the rocks also provide some entertainment, if you like climbing up stuff and jumping off again that is. I’ve seen red beaches before, but this one is the nicest yet. 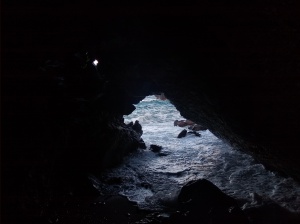 After the red, it was time for the Black Beach, a little bit of a back track, this one comes with its own lava tube ready to explore right down to the ocean. It was pretty busy, and the waves were pounding, so we kept dry this time and made it a short stop, we still had a few more places to see. Heading south, past Hana and around we were looking for the Seven Sacred Pools also known as the Pools at Ohe’o. More waterfalls, more pools, more forest, but this one really does up the ante and offer a really spectacular view from every angle. The park is fenced off, and for the first time the State Parks department had done a good job of providing paths and signage without destroying the area, but still providing good facilities for people of all fitness levels.

I hate to say the standard was very low, with a lot of places either overwhelmed by concrete and warning signs, or with nothing at all. So with a good start, and reasonable access to the good bits (I didn’t have to hop the fence to get the photo I wanted – always a good sign) we explored. It was pretty much deserted, only a handful of other people there, and there’s plenty to see. The seven pools at the bottom are just the start, and you can hike up the ridge alongside the valley and get some nice views down as well. We couldn’t go too far due to time, but it sounds like there was even more impressive stuff to see further up the trail.

Finally, we were heading home. But we were taking the scenic route, around the south side of the island. The road this way gets a lot more rugged, and I would not recommend for a nervous driver, sections with steep hills, tight corners and just dirt road surface all together made for an exciting drive, especially as night came in and the road got darker. Thankfully there’s not much traffic along there as passing places were few, far between, and barely navigable. The views continued to impress, each bend inland offering another steep mountain stream cascade or waterfall, then back again to the cliffs a little beaches along the coast. Once night had truly set it, I picked up the pace, and the road surface improved to brings us further inland, higher up the volcanic mountain that Hawaii is built on until we caught glimpses of the town lights far below us. We were pretty happy to get back and get some food, and I was suitably tired to pass out in the boot of the rental car after saying goodnight to the others.

Turns out the car camping is pretty easy in Hawaii (or anywhere if you’re smart about it) I dropped the small half of the back seats, crawled into the boot with my mini-inflatable mattress and poked my legs through the hole to let me stretch out. With my bag partially covering my feet I believe I was pretty well camouflaged from the outside, and I could easily lock the doors with the remote so I felt pretty secure. That first night I was just in the car-park outside the hostel, too lazy to drive any further. I’m sure it’s illegal, but with my stealth technique I got away with it. The next night I chose the beach next to my hitching spot from a couple days previous, this I believe is legal, as there’s some many campers down there doing the same thing. I had a tent with me, but I found the car comfy enough that I felt no need to to pitch up, and just sneaked in the back again.

As with camping, you do tend to wake up early as the sun heats your car, but I didn’t feel like this was a handicap. That first morning I took the time before I was due to meet the others to take a cheeky shower in the hostel, and head up to the Iao Valley State Park. This park had been made ‘accessible’ meaning there was a hellish amount of concrete laid down to allow older folks and disable users access. I’m certainly not against improving access for less mobile people, but the paths were tightly packed in a small area and were mostly very unnecessary with only one good viewpoint in the wheelchair accessible area but many snaking paths to reach it. 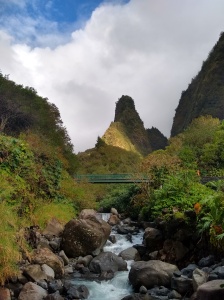 If you cross the bridge there are plenty of steps that will take you up to an overbuilt rest point from which you get a nice view down the valley, and of the Iao Needle, an impressively pointy natural feature. There don’t appear to be any official trails that lead up into the hills from here, so I have to agree with the description I was given – it’s a nice spot for seniors. It is a nice spot, but the parking fee is too high for such minimal sights and the over-development puts a dampener on the natural beauty. It feels like not enough thought was put in to this when they planned it. Worth a quick stop if you’re nearby, but don’t worry about missing it.