Madrid, the capital of Spain, the cultural and physical centre of the Iberian peninsular and home to some amazing oddities. We all know about the crazy Gaudi architecture in Barcelona, but lets’ explore Spains largest city.

The only known statue of the devil in the world holds a glorious position in the impressive Retiro park in Madrid. Officially called the Estatue del Angel Caido, or Statue of the Fallen Angel, it doesn’t appear too satanic, but that fallen angel became Lucifer himself. Most cities would refuse such a statue, but it seems in Madrid the rules are a little more relaxed. Just don’t down head down too late, some nights of the year reports of black hooded worshippers performing satanic rituals abound.

If you have a somewhat twisted idea about what art should look like, maybe a trip down to La Neomudejar will be up your alley. Not far from the main train station in an old industrial building a collective of artists create and display their work. Creepy repeating video shorts, random nudity, industrial machinery, bleak charcoal drawings and frankly scary statues litter the handful of rooms. The noises from the various mini-cinemas induce an eerie atmosphere, and be prepared to share your seat with a decapitated manakin. Dark, creepy and delightfully weird.

An Egyptian temple in a European capital? Why not, it’s beautiful, strange and fits in surprisingly well. The Temple of Debod is free to enter, and even hosts occasional evening concerts, and only a couple metro stops away from the centre of the city, it’s really not hard to find. Built 2 Centuries BC, and transported to Spain in the 20th Century AD it was partly a donation, but also a rehoming as it’s original placement is now underwater thanks to the construction of a large dam in Egypt.

Do you believe in ghosts? Perhaps a trip to Estacion De Chamberi, an abandoned metro station will convince you. Part ways between Bilbao and Iglesia stations the platforms at Chamberi were too short for the newer trains, and with others in such close proximity it wasn’t needed anymore. While they closed the station the trains still ran through it, and the eery empty space was nick-named the Ghost Station. It’s now open and free to the public, but operates a one-in-one-out system, so arrive early (ish, as it doesn’t open until 10) 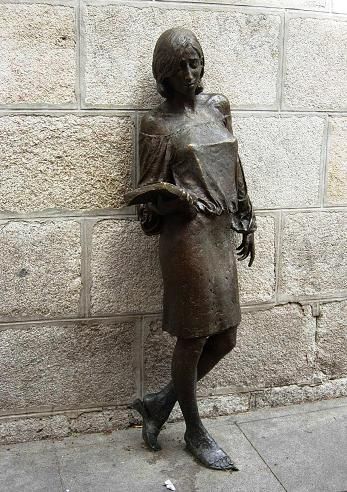 Before women were permitted entrance to the university, what could a girl do? A little inspiration from a Shakespearean classic maybe, and there’s one more boy in class today. Julia decided to get herself an education in 1848, and this statue is dedicated to her.

A Rock and Roll Grandma

Another statue, but this time it’s an old lady throwing the metal horns. Why? Because they loved her of course. The restrictions of Francos regime meant metal music came to Spain late, but not too late for Angeles Rodriguez Higaldo. She embraced it, and became a regular at metal shows, big and small. AC/DC, Rolling Stones, Black Sabbath and many more. She became a local icon and after she died in 1993 they put up the statue in her honour.

Perhaps after all these unusual sights you need a drink to relax. What better place to go than the beach right? But Madrid is about 350km from the ocean, so the locals decided to make one. Not a city beach like some, but an underground beach, with a bar of course. Ojala is a funky place serving some nice traditional Spanish food, but most importantly, they let you sink your toes into the sand at their basement beach.