Valladolid may have my destination, but the best thing about travelling, and staying in hostels, talking to other backpackers, is that you hear of new places, things to see that you could’ve so easily missed. Some of them turn out to be the best spots, others a bit dud. Izamal was somewhere between the two, and as it was on the way I was happy to explore another town. 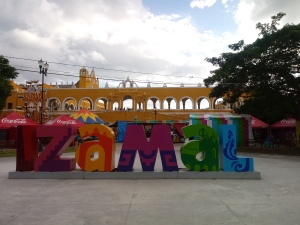 Known as the Golden City, it’s probably a little underwhelming for that title. There’s not loads of gold, and it’s no more than a town really. But it does have an encompassing golden yellow paint scheme that spreads across the central area, and a huge convent. The convent is typical of the Spanish rule, and the change in religion and cultures, and makes for an interesting building to explore, although it mostly a church and the big courtyard at the front. Not far from the convent is another Mayan ruin, not as impressive as Uxmal or any of the big ones for that matter, but still good to climb up. 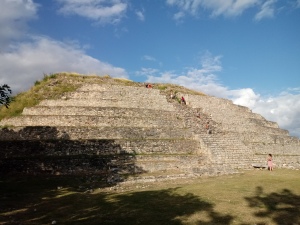 From the top you can see how flat that Yucatan Peninsular is, the forest just stretching out as far as you can see. Supposedly the explorers found the Mayan ruins in the region by climbing above the trees and looking for lumps on the horizon, those lumps were where the forest had grown up over the ruins. Seems a bit too easy to me, but it worked and now tourists have some wonderful places to explore.

The local buses in Mexico aren’t quick, but they are cheap, usually only a few dollars to get to the next major town, but via a few extra stops. So these extra stops meant I arrived in the evening into Valladolid, just enough time to check-in and go for some food. I spent the next morning browsing the shops and generally relaxing – something I’m not very good at doing while I’m away, but I’m glad I did. It’s nice to stop and smell the roses occasionally, especially when on holiday. Later that day, my new friends arrived from Merida, and they had free bike rentals through their hostel, so we jumped on those and headed south towards some cenotes.

Again these came in a pair, a fair bit more expensive than the previous two, and also a lot more commercialised. From the green screen photo shoot on entry, to the shopping strips you’re forced to walk along to reach the actual cenotes, it felt designed to remove money from the pockets of tourists. Thankfully they hadn’t made too many changes to the cenotes themselves, but these were rather different to the ones I’d seen before. Descending into the ground, a dark and damp stairway leads down, it’s a mix of concrete and stone, slippery in places, and barely lit by bulbs dangling from the roof. But get far enough down and your eyes get used to the gloom, and you’re presented with a big pool of water, in a bigger cave, the ceiling stretching away above barely visible, until it reaches the single hole, through which light is pouring. The day we were there it was cloudy, so we didn’t get that extra special Instagram shot, but it was still magnificent. We jumped in of course, and it was cold! Cold compared to the air temperature at least, once we acclimatised though, it was very pleasant, exploring around the edges and floating through the middle. 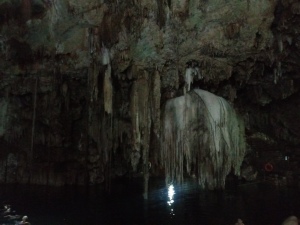 High up on the roof of the cenote is a hole, which, on a better day, the sunlight would have streamed through, leading to some amazing photos (and Instagram posts) but sadly the only thing streaming through that day was the rain. Not that that dampened our spirits, it actually made it look more wild, more like the set of a Jurassic Park movie.

The second cenote was a short walk back along the tourist gauntlet. Interestingly a lot of the stalls were empty, clearly the time of year wasn’t so profitable and there are more enterprising things for the locals to be doing. Either that or the popularity of these cenotes was dwindling, which I find hard to believe.

The natural beauty is outstanding and for a smart backpacker they are very affordable and easy to get to. But anyway, the second pool was a very similar situation, with a staircase leading underground, a dark and gloomy pool, and of course a hole in the roof. Presumably somewhere in the dirt at the bottom of the water is a skeleton, the first person to have found the cenote, by making the hole in the ceiling. This one had steep cliffs on one side, which worked perfectly for diving in, and there was a little island under the hole, a good spot for a picture or two, if you had a good waterproof camera or a great zoom lens. As we left, we decided against the terrible green screen shot of us ‘in front’ of the cenote.

Cycling back to town on the rickety bikes in the rain was a lovely tiring a wet experience, but not too bad, especially when the bikes were free. It certainly felt like we had earned our dinner that night. It was an uneventful evening, followed by an early morning to prepare for Chichen Itza.