After the stop in Chicago (read that blog here), my main destination was Mexico, the Yucatan Peninsular in particular. I was hoping to experience some culture, some great food and of course a bit of the beach life as well. I was happy to find that it exceeded my expectations on all counts.

To make my life simple, I started my trip in a little hostel in Cancun. I do not recommend this! The hostel was fine, but there were only a few English speakers around, which made it a little tricky to make some friends. But not put off, I went to explore. a little Googling and I found the nearby market, supposedly a an authentic experience where you could browse through the various wares, a place where the locals shop on a regular basis. However the parts that I found were nothing like that, a horrendous parade of tourist shops, all selling the same old crap. Prices were very low, but quality matched, and after only about 10 minutes of heckles and stress I decided to bail. Later that day I headed out to Zonas Hoteleras, which as you can guess by the name is the odd strip of land that sticks out from Cancun and forms a wonderful beach, along which the big hotels have been built. I was curious to see what the super touristy area would be like, and well, it was pretty much what I expected. Large hotels, fully enclosed and shut off from the rest of the world, a few touristy shops selling the worst of touristy souvenirs and tour companies, plus a little area of bars and restaurants gaudy and brash trying their hardest to get people through the doors. I’m not sure if the low season was adding to the desperation, or whether they were still building up to their peak, but I would not like to see that any worse. If you can handle the hassles, then you can over-pay for pretty much anything you can think of, someone will be able to find it for you. I didn’t want to join in on the cartoonish ‘Mexican’ fiasco, so I jumped on another collectivo (cheap local bus) and got outta there.

My destination the next day was Merida, rated very highly on several blogs as a great place to experience Dia de los Muertos. I arrived a couple days early, and checked in to my extensively researched hostel (Side note, in Mexico, and a lot of other places, especially cheaper countries at low season, do not book hotels and hostels in advance, you’ll be able to make a more informed decision and get better rates once you’ve got your feet on the ground. This hostel worked out well, but other spots not so much) Thankfully, I made some friends easily here, which was a relief as spending three days alone would’ve been a big downer. So with a Dutchie I wandered the town, investigated the celebrations that were due to happen and got some food. I noticed as well that there were a couple tour buses buzzing around the city, which surprised me, clearly there was more to see than I had thought, so using my best two feet I took off to investigate some of these highlights.

Which I think was a bit of an overstatement, the most impressive buildings were the old Spanish colonial buildings along the gorgeous Paseo de Monejo, but the most interesting was the incredibly fake ‘Mayan’ fountain/roundabout. The glorious climax of the road that went past those Spanish houses, this ugly monstrosity dominated the surroundings, a fascinating idea that really just didn’t work. Dinner that night was joined by a German, and we made a plan to rent a car and go exploring the next day. 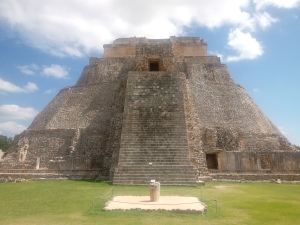 And exploring is what we did. We picked up a Brazilian at breakfast and together we ventured out to Uxmal, a real Mayan temple complex to rival Chichen Itza, we even splashed out and got a guide to take us around. I have to admit I didn’t love the guide, he rambled a bit much and was very hazy on actual facts, but I still saw a lot more with his assistance than I would’ve alone. There is the main temple building, and several courtyards, a ball court and some housing at the site, plenty to see and do, and very impressive as well. The site is pretty large, enough for an hour or two wandering with or without a guide. There’s not a whole lot of information boards around though, so if you do want to learn something, then a guide, or one of the those fancy new downloadable audio-guides is the only way to go. From Uxmal we decided to find some food, and go on an a cenote hunt.

I had already starred a few on my downloaded Google Maps, so we punched those in (specifically X’Batun and Dzonbakal if you’re interested – they are recommended) and set off, eventually finding them down some lovely windy roads, through little villages and more. These were small, but beautiful, I think the pictures really say more than I ever could about how pretty they were. It was interesting, the two were so close together, so you paid entrance for both, yet one was very busy, a whole church group had come across from a nearby town for an outing, while the other was completely empty.

We had a good splash around in both, and after dipping into the second, we could see why it was less popular – the angle of the cave meant it didn’t get much, and while the water wasn’t cold by English standards, it certainly wasn’t warm in there, and the longer we stayed, the chillier it got. So hopping out it was time to head back to the city for dinner with more people, friends of friends who had gathered for Dia de los Muertos. Some of these friends became my main travel buddies for the next week or so as well.

The last day in Merida was the celebration and procession day for the actual Day of the Dead, so we didn’t want to stray too far from home in case traffic and things got too much and we couldn’t get back to the town. So after a slow start we made ti all the way into town to see the market. Unlike the touristic affair that was Cancuns’ market, this was the real deal, complete with uncomfortable examples of animal cruelty and all. There was a thousand shoe merchants, and a few funky street food stops (nearly all of them taco stands) and a fair amount of ornaments and tourist fair as well. It was worth the walk from the hostel, and although as all markets do it did get repetitive, it was still well worth seeing, and a good way to spend an afternoon.

That night was the event we’d been waiting for though, Dia de los Muertos! We dressed up, nice dresses for the ladies, and collared shirts for the boys (most of them) and headed to town. The procession was planned to leave the main graveyard at 8pm, and head towards one of the towns main squares over the following hour. As the square was closest we headed there early, got some food and our faces painted to join in the fun. The painting was all the same price, but some of the face painters had much longer queues than others – the girls chose to join a much slower queue, in order to get more fancy make-up with glitter and colours, while myself and some others stuck with the basic black and white. In hindsight I do wish I had gone a little fancier, but it was so hard to wash off just what I had that any more and I would’ve had nightmares.

So from the square we walked towards the graveyard, hoping to find a good spot to see the procession, and we did. Found a good wall to sit on and we waited, and waited, and waited some more. There was a lot of people in the streets, but nothing seemed to be happening. After some exploring by taking the side streets we detected the start of the parade and prepared ourselves. And as the march approached us, we were disappointed. I have to admit, that we were to blame for this, as nowhere online or in the town did they say that it would be a big parade with floats, it was named the procession and that’s what it was, a line of white suited made up people. It was still nice to see, but I think we had built it up so much more in our heads. Still, with the main event over, it was time to party! Heading back to the square to find the stragglers we found a great little bar with a live band all appropriately dressed for the night. Music and drinks and dancing and we ended up enjoying the night thoroughly.

The next day it was time to move on, Valladolid was calling. Continue reading here.