Elk Falls is a pretty impressive waterfall. I fell in to thinking that the island was pretty small, like I’m sure many tourists do until they google the directions to drive to Tofino, so to see such a sight, I was surprised. It’s so well hidden, completely surrounded by forest, and the suspension bridge barely makes a dent in the nature around it. In fact, unless you’re at the platform, it’s hard to make out through the trees. You can walk around from the bridge as well, to the high side of the waterfall, and from there you can go as close as you dare. I was hoping for an awesome photo looking down over the falls, but it’s too sloped, and too slippery to make it worth the risk.

That night I checked out my first Canadian Hockey match, a junior team from Courtenay versus a Vancouver city team. If you know that Vancouver is a much bigger city, with much larger schools, and therefore a lot more players trying for the team, then you’ll understand what I mean when I say the game was a bit one-sided. The home team did their best, but lost rather un-spectacularly in the end. The highlight for sure was the peewee hockey at half-time. The kids, barely old enough to skate tottered their way across the ice, falling quite often and generally being very cute. There was one boy, significantly taller than the rest, maybe a year older who had some skills, mostly the ability to hit the puck in the right direction, and not fall over while doing it. Those skills won his team the match. Of course, while watching we had a true Canadian hot dog. 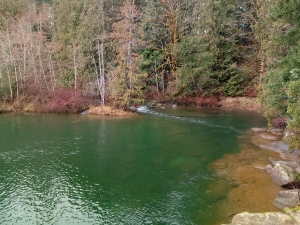 Our next day was was pretty chilled, with just one spot to go check out before heading back down to Nanaimo to catch the ferry back to the mainland. That spot was Barbers Hole, a spot more popular in summer for obvious reasons – it’s a gorgeous swimming area. As it was cold, and no-one was coming to swim, we had the place pretty much to ourselves. Strolling around, snapping pictures and just having a nice quiet time enjoying a bit of nature.

For an island, it doesn’t feel much like one, I guess I was a little way inland, but when I think of islands, I don’t think of big waterfalls or mountains with ski hills. Despite being from the UK, which has all of these, it’s rare that people refer to it as an island, so the name Vancouver Island, drums up very different ideas in my head. This is no way a bad things, as it means it has all of the island things, fish and chips, beaches, surfing, along with the aforementioned waterfalls and mountains. There was a point that I was looking at working at the Mt Washington Alpine Resort, but it didn’t quite materialize, but having seen the island, I think it would have been a great place to stay.

After exploring Barbers Hole, we jumped in the car and headed to the port – we missed the one I had intended to catch, so a bit of a wander through a nearby shopping mall filled the time, and I was back on the boat heading homewards. It was a nice delay actually, as it meant the sun was setting as I sailed back to shore, watching the sun disappear behind islands and headlands before reappearing to shine brightly on the sea. I was pretty lucky when I got back to land, about 20 metres from my car some car park attendants were snooping around and I knew my ticket had expired already. So I was fairly swift about my exit, and I was on the next leg home, just a quick diversion through Vancouver city to collect my friend again and we were off. 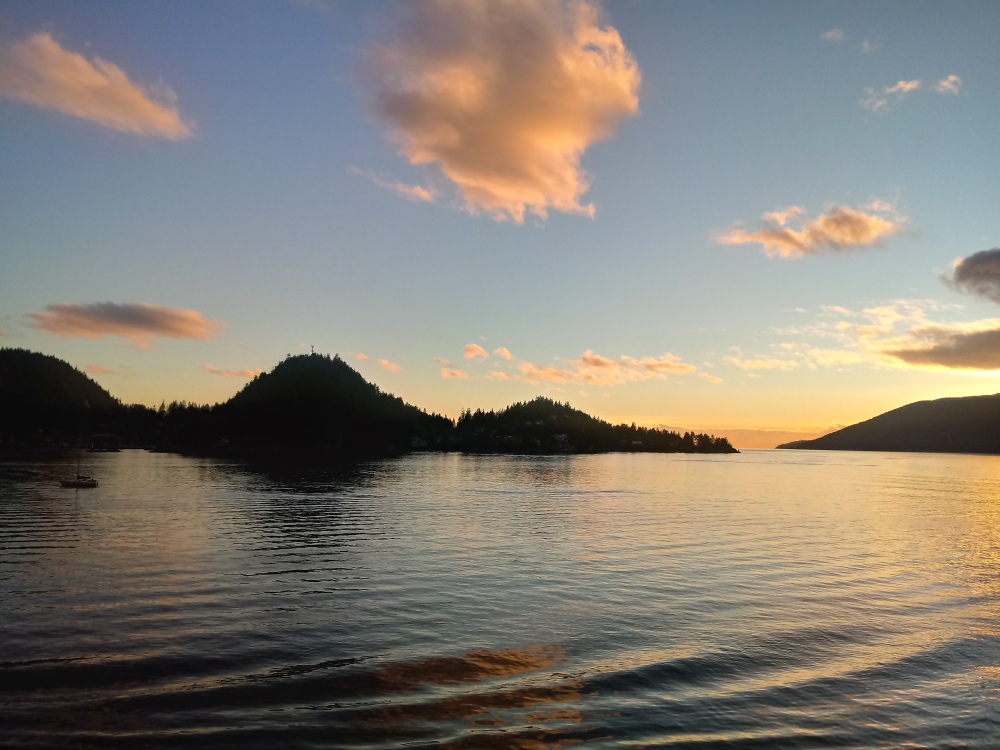 While the trip did involve quite a bit of driving, I’d say it was well worth it. The Island is great, and it was wonderful to catch up with some good friends again. Just remember, it’s a lot bigger than you might have imagined – Victoria the main city to Tofino, the big surf hotspot on the west coast is a solid 5 hour drive. Make sure you plan ahead!