Getting out of Calgary was surprisingly easy, straight through and out the bottom, on the road south towards my next destination – Fernie. The only issue I had with this road, was the lack of gas stations, I ran out part way and had to hitch a ride, buy a gas can and fill it up, then hitch back down again. Thankfully it wasn’t too far away, but it put me back on my schedule a little. Still, the road was nice and the views impressive as I re-entered the Rocky Mountains. It’s a spectacular part of the world, no matter which way you approach

Fernie itself is an interesting little town, big enough to have something going on, but definitely a small town feel. There’s the usual strip of gas stations fast food places and industrial businesses on the main road through town, but there’s also a very typical high street, one which is a lot more alive than many more I’ve seen. I guess the size of the town means it wouldn’t be profitable to build a shopping mall on the outskirts, so the businesses have stayed in the centre and the town is nicer for it. Original stores and boutique shops give a much more homely feel than somewhere like Kamloops.

Once in the town, I met up with some good friends who’s coach I was crashing on for the next couple nights. The nights were spent catching up and the days on the hill riding. Fernie Resort is impressive by Canadian standards, big hills, steep runs and plenty of terrain. I have to admit I was jealous, I had originally been planning to base myself in Fernie, and the size of the hill really put Sun Peaks to shame. Maybe it the novelty of a new place, but almost everywhere I went in Canada felt bigger, even though Sun Peaks has the second largest ride-able area in the country. Still, having some buddies there meant it was easy to get those hidden side hits and little pockets of fun that I’m sure I’d have missed on my own. The hill is very nice, quiet with a decent base station and a fun bar (and very busy) that had a great vibe. I’ll be sure to take a few trips there next winter as well. My thanks to the crew that put me up (and put up with me) for those days, and I wish I could’ve stayed a bit longer, but work was calling and I had to head out. 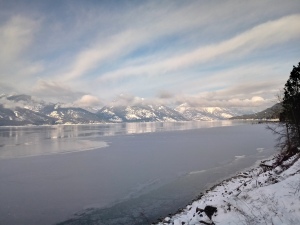 I’d spent a fair bit of time looking into the best way home, as I didn’t want to just follow the same way as I’d come, firstly as it was a long way in the wrong direction, but also as it’s more fun to adventure some more. So I headed west, back through Cranbrook and along the southern edge of the Kootenay Rockies, aiming to drive up along the Kootenay Lake, and cross over on the worlds longest (free) ferry ride. I was successful at the first part of this, and the drive up by the lake was amazing. The lake is huge, so it doesn’t freeze, but combined with the massive ice flows by the shore it creates a fascinating and beautiful effect. This part of the drive was probably the nicest of the whole trip, the towering mountains to my right, and the lake to my left, shining wonderfully in the sunlight. 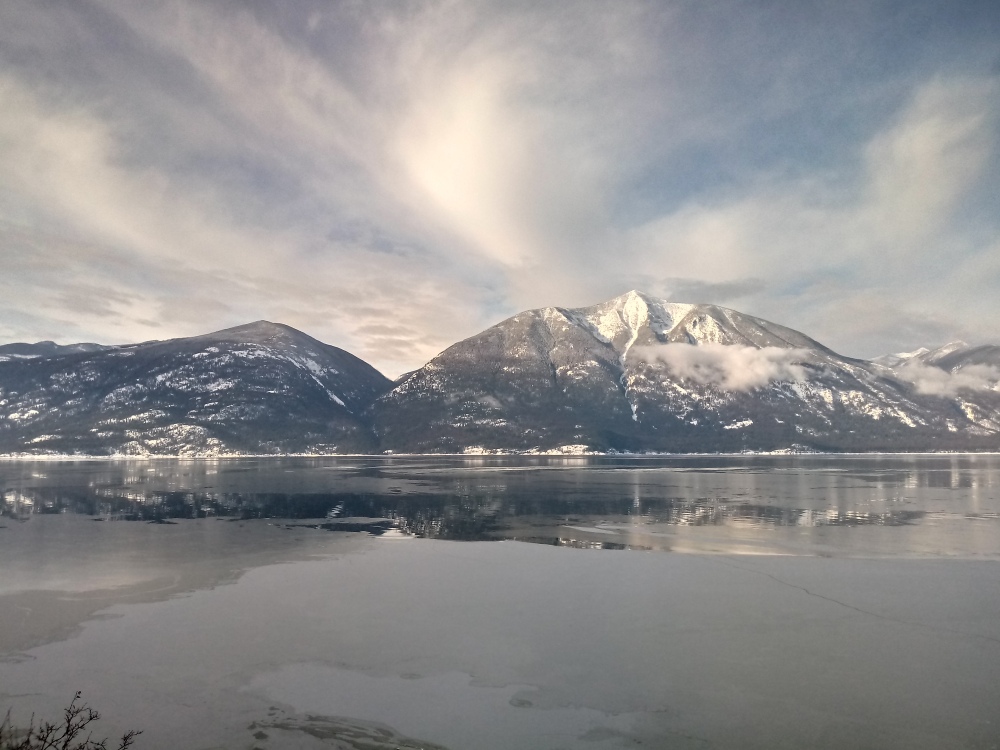 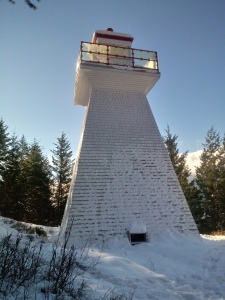 When I arrived to catch my ferry I was in for a strange shock, the whole area around the ferry on the east cost of the lake runs on Mountain Time, not Pacific as I was expecting (and as all of the other areas nearby do, there’s a good article about it here – Spoilers, they haven’t changed yet) So I had an hour to kill. Thankfully there’s a little coffee shop right there at the ferry port (concrete landing I should say) and the staff in there are clearly used to people arriving at the wrong time, a quick coffee and chat gave me a few options of things to see nearby, and thankfully there are a few. A lighthouse on the hill overlooks the lake, and gives stunning views of the opposite shore, where a large inlet leads to a dip in the mountains, and the destination I was hoping to reach soon. There’s also a Buddhist/yoga Ashram to the north that allows you to get down to the shoreline, with even more great views. 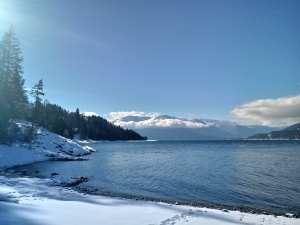 Driving back from the retreat was where my plan really broke down, with only 5 minutes to catch the ferry I skidded on some ice as I went up a rise, I slid slowly but like watching a glacier break and fall into the ocean my car came to rest on a fence post and pile of snow. It lifted my front up just enough that my tires had no grip on the slippery road and I was stuck. I dug out the snow as much as I could, cursing loudly as I did but to no avail, the fence post was the problem, and there was no way of moving that while my car was sitting on it. So I pushed, and pulled, and waved at every car that went by – I think many of them were headed for the same ferry, so couldn’t stop for long, but thankfully a guy came by eventually who had a big truck and a length of chain. 1 quick tug later and my car is back on four wheels and ready to go. I thanked the guy, ever grateful of being in Canada where people are so willing to stop and help, even when they have no time or ability to. This delay meant I missed my ferry, obviously. So I headed to the last of the locations I had been suggested to visit. 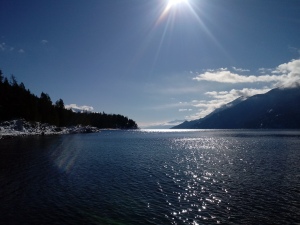 This turned out to be the best, even if I did end up soaking my shoes and socks hiking through the snow. The location was Pilot Bay Provincial Park, a snowy woodland on a spit of land surrounded on three sides by the lake. The inlet side was full of ice, so fine that you could see the cracks between each piece and the snow that had filled in the spaces. On the far side was a delightful little beach, obviously in the direction of flow from the river channel opposite it went right down to the water, and with the sun glittering off the waves it was a magical place to sit and wait for the ferry. I would love to return there in summer, to see that gorgeous place in a completely different setting. Having lived in Banff now for a summer as well, it’s amazing to see the differences a season can make. 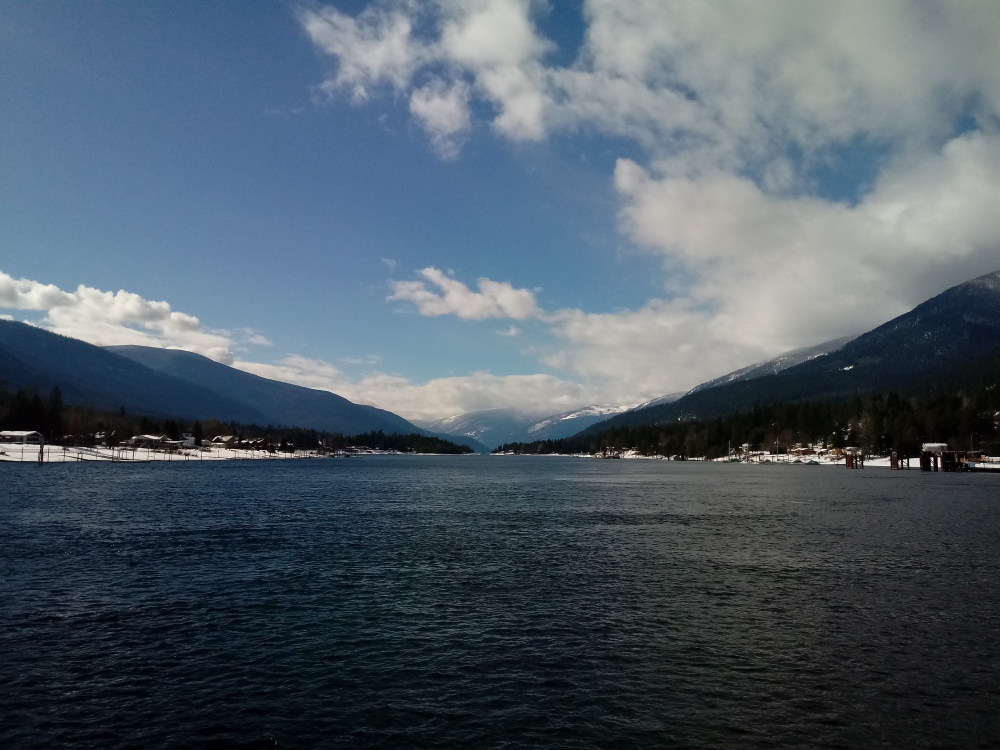 One thought on “To Banff and Back Pt.3”