We had a list of things we had to see in Banff National Park, mostly made up from Instagram favourites. 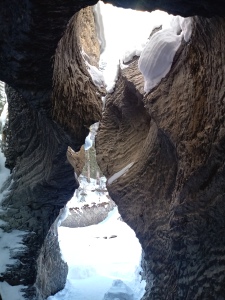 So, starting from the further, we headed up to Yoho National Park and back in British Columbia to explore Emerald Lake. We also stopped off the Natural Bridge, which turned out to be a fascinating place. The river has bored a hole through the rock ridge, creating the natural bridge itself, but with the water frozen it’s possible to wander inside. Effectively an ice cave, with patches of swirling rock above and around the edges, the view upwards certainly was quite unique.

Emerald Lake was the prettiest frozen lake we’d seen so far, and a bit of a jaunt across the snow and ice led us to the avalanche path. Thankfully no danger that day, and plenty of cross country skiers to watch as they slid past. The views of the mountains surrounding are spectacular, and the perfect warm-up to the next stop – Lake Louise

Lake Louise is one of the most visited spots in Canada, and it’s clear to see why. The epic ice spans hundreds of metres towards the glacier perched high on the mountain on the far side. Ice skating on the lake is popular, and the incredible fancy hotel has a surprisingly affordable restaurant with gorgeous views out over the lake. There are ice sculptures to view and even an ice castle you can wander through. It is busy, even through the coldest of winter days, we were there in Feb and there certainly wasn’t a shortage of tourists to fight through, although it doesn’t compare to summer. The best part though is quite a walk away, if you cross the lake to the very far side, on the cliffs on the right there is a wall where ice-climbers can be seen.

The path up to the base of this is steep and a little treacherous, but the route back down is the best. From frequent use the path has been smoothed away, leading to an slide instead of a walking trail, and this slide is pretty fun to bump down. I wouldn’t recommend a sledge, you’ll get plenty of speed just bumping down on your butt, and even then when I tried it the video on my GoPro is mostly useless as I lost control part way down and it slipped from my hands. Thankfully I was able to grab it again as I slid by so I didn’t have to hike back up again. I can recommend the slide as one of the most exciting of my adult life. 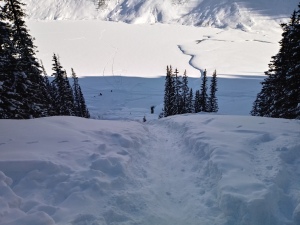 I was giggling like a school girl by the time I got to the bottom. We watched the sun set from the restaurant, a nice moment as it dipped below the mountain on the opposite side of the lake, and with a perfect view from the window.

A nice dinner and a quiet night in in the warmth, allowed to prepare for another day in the cold, you know it’s cold when your nostril hairs freeze as you walk out the door. 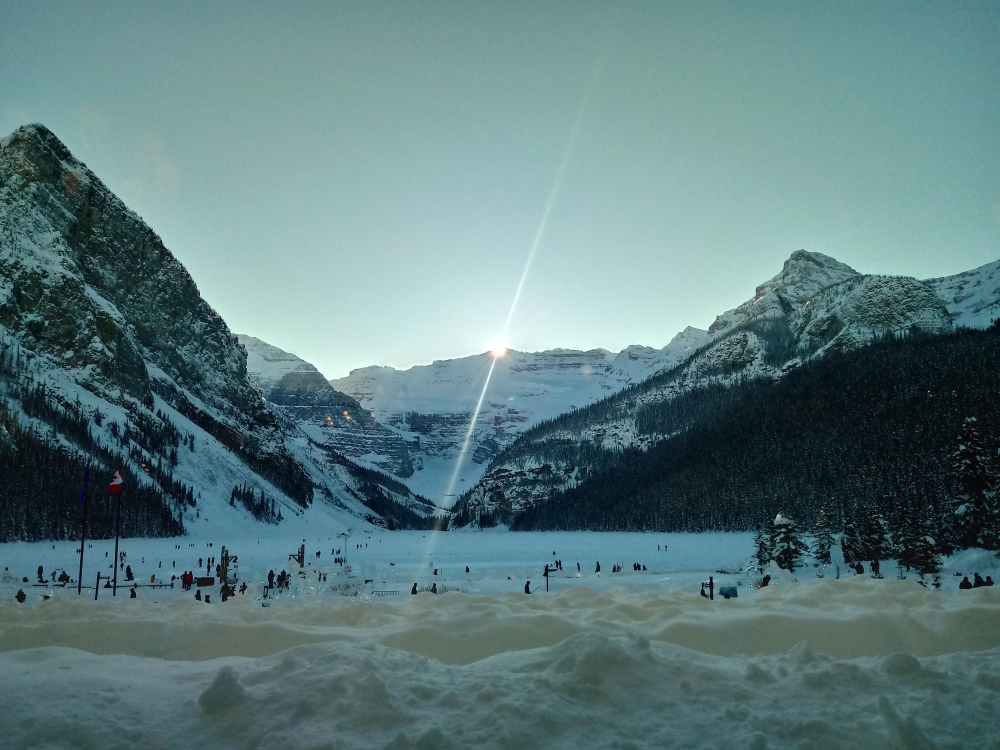 Day 2 started early, plenty more to see in Banff starting with Johnston Canyon, a drive down the 1A, the Bow Valley Parkway, which in summer is a great road for wildlife spotting, but in winter there’s mostly just snow at the sides of the road. We were recommended to wear ice cleats for the walk which was good advice that we did not take. Still, a bit of slipping and sliding never hurt anybody.

The canyon is fascinating, with huge iced over waterfalls and a snowy riverbed the whole way along. It’s a fair walk along, not what I’d call a hike, as the trail is paved the whole way to the upper falls but still a nice excursion. Having gone back later, it is more impressive when there’s a bit more water flowing, but no matter what time of year it’s well worth a stroll along.

A little trip up to Mt Norquay to see the view, and check out the Tube Park. Tubing is a lot of fun, mostly for kids, but if you’ve got a group of childish adults you’ll sure have some fun as well. It’s a simple activity, ride the magic carpet (travelator) up the hill, hop in a big inner tube and slide back down again. And of course we got the typical selfies with the Banff sign which all ticked a couple hits off the list, but spending a bit of time around the Fairmont Banff Springs hotel was a surprisingly nice diversion.

It’s an impressive building, built more like a European castle than anything Canadian. Supposedly this was to attract more European tourists to the area, but why travel all the way from Europe to see something that looks European? Still the hotel is magnificent and would be a great place to spend a night if you could afford it.

From there a little trip to see the frozen Bow Falls and check out the bend in the river gave a good opportunity to get some more nice photos. For the Instagram minded out there, the whole region is a dream come true, idyllic lakes and Monumental mountains make for some breath taking views. After so much time out in the cold, a dip in the hotel hot tub and some good food polished off the day nicely.

Our last day in Banff meant checking off the last of the bucketlist items, namely Minnewanka and Two Jack lakes. Now one thing that’ll you’ll realise if you ever visit a mountainous region in winter time, and you go visit all the lakes, is that frozen lakes all look pretty similar. You could argue that they look similar all year around, but something about the changing colours, the reflections of the mountains make lakes in summer a bit more interesting that in winter, when they are all, all white!

So, with that we headed out of the mountains and down towards the big smoke of Calgary. We only had the afternoon there, but a bit of Instagram hunting found us a few places to hunt down, namely the Canada 150 sign, and the Peace Bridge. We found some beautiful photos of the Peace Bridge, but googling it gave us a more realistic impression, something of an ugly bridge made better with lights and filters! 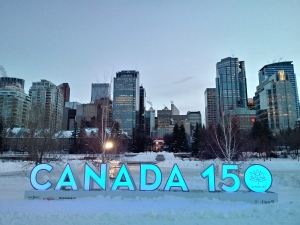 Still by parking on the South side of the city, it’s easy to stroll across Princes Island and see the park, the sign and the bridge on route to the city centre. As it was evening time, we explored only a little until finding a suitable looking restaurant which did the job at feeding us and headed back the hotel. The next morning, I dropped my wonderful travel buddy at the airport, and then it was time for part Three of the adventure. 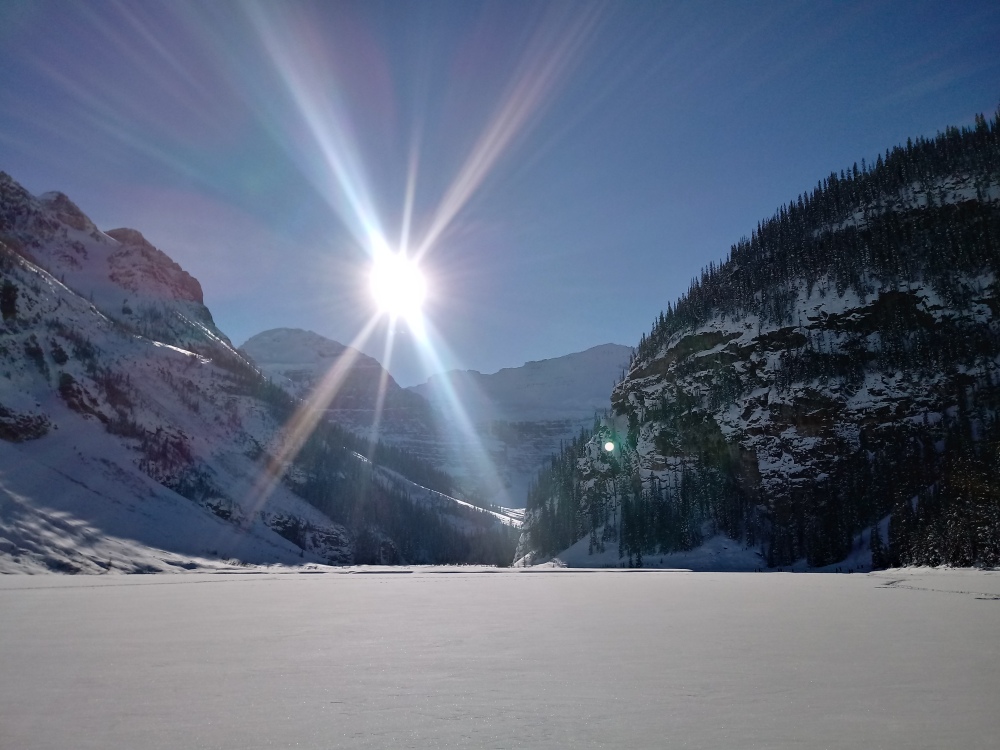 One thought on “To Banff and Back Pt.2”