Jasper National Park is directly north of Banff, straight up the 93 , one of the most impressive drives in the Canadian Rockies. 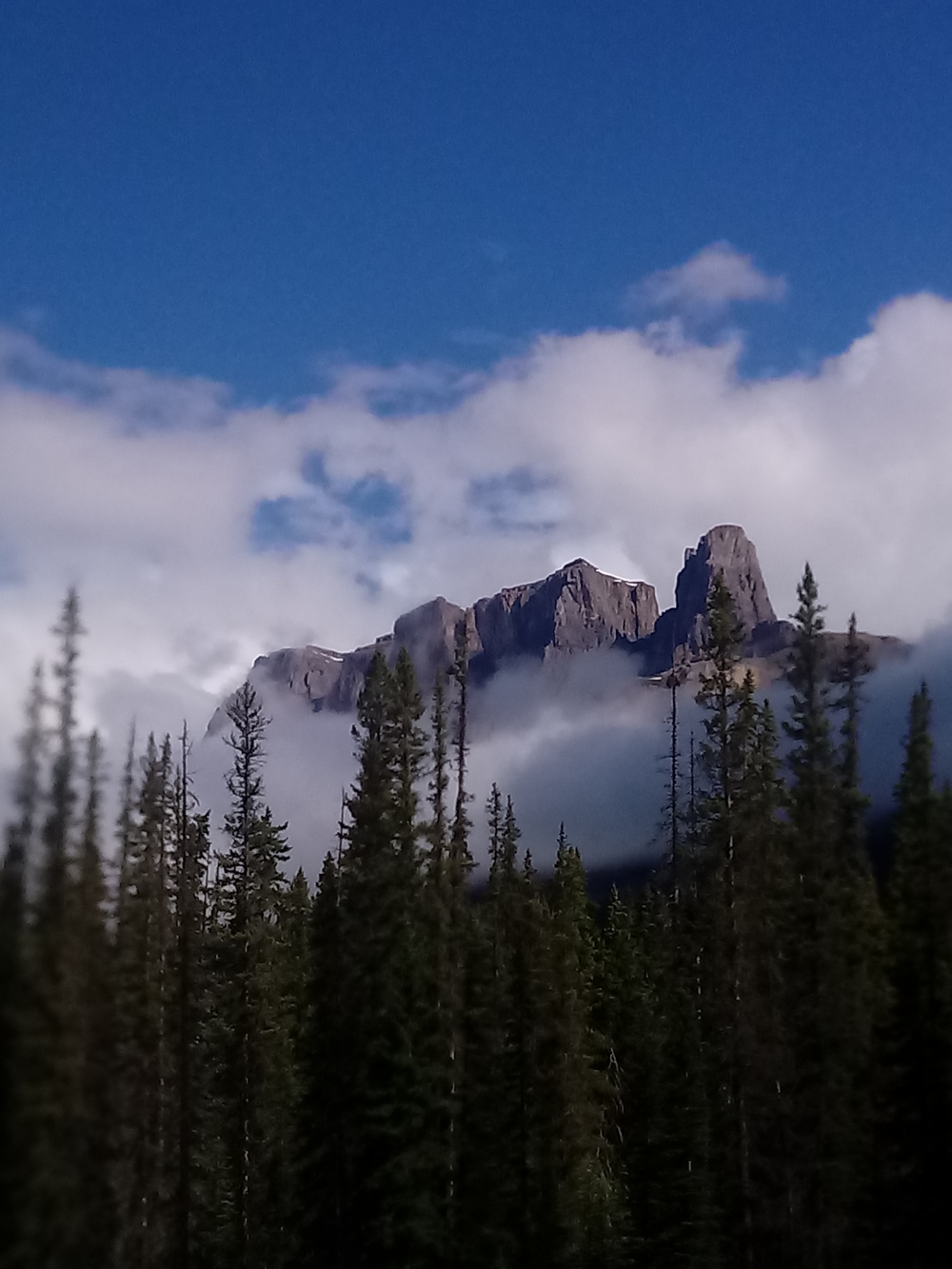 Making the most of the post Canada Day lull, a quick one night trip up to Jasper was planned. This meant a lot of google to find the best spots along the way, and of course ‘starring’ all the points on google maps and downloading the map. While it’s not perfect for road trips yet, there’s nothing out there any better. A great find was an article on the Banff and Lake Louise Tourism page – ’11 UNFORGETTABLE STOPS ON THE ICEFIELDS PARKWAY’. This gave a good run down of the lesser known stops along the route, and it’s a great idea to plan ahead, if you stopped at every pull in It would take about 3 days to make it to Jasper town. 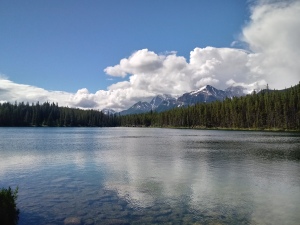 So armed with a list of destinations, a car, a tank of petrol and a couple of friends we headed North. Clearing the Highway 1, the first turn was only minutes after joining the 93 – Herbert Lake. A small but pretty lake with only a few tourists cluttering the car shore. The woods hide it from the road, and make it feel secluded the whole way around, plus it’s small enough to swim in on a hot summers day. It would be a great place to escape to with some friends, wander around to the far side and enjoy some peace and quiet without having to hike too far.

Next up is the undeniably impressive Bow Lake, visible from the road and therefore a very popular stop with everyone driving by. It can be spoilt somewhat at the roadside pull in by large tour groups, but if you make your way around to the Num-Ti-Jah Lodge there’s a public car park there as well and a 2 minute walk takes you to a much quieter part of the lake shore. There’s a good hike around the edge of the lake to the falls that flow right off the edge of the glacier, sadly time restraints meant having to leave that trail for another day.

The hike we did make time for was from Peyto Lake instead, The lake itself is rather gorgeous and walking down to the shore is possible, which would be a good way to escape the crowds. But we decided to go the other way, following the trail up and over the ridge between Peyto and Bow and getting an amazing view down to Bow, and along the valley as our reward. 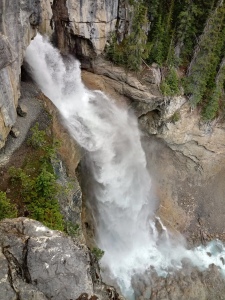 Further up the valley Mistaya Canyon is closed for repairs to the parking area and trail head, so we had to continue on, past the commercial gift shop nightmare that is Saskatchewan River Crossing and up to epic switchback that takes the road up and around the Parker Ridge. The upper corner gives some great views back down the valley, another very quick stop, especially in the rain. We were a little more committed when it came to finding Panther Falls though, just a couple hundred meters around the same corner. It’s possible to spot the Bridal Veil Falls on the cliff face opposite, and from that turn in it’s a very short walk to Panther Falls. As you head out the far left corner of the parking area you’ll be able to hear the roar of water, and a twenty steps later you’ll find the deep carved rock that makes the top of waterfall shoot out of the cliff a little lower down. At the top it’s possible to climb and explore, finding the routes the water used to take by the swirls and bowls carved into the stone.

There are some unmarked and unofficial trails that lead down and around the cliff face that allow you to get to the bottom, just don’t get too close or you’ll have a very soggy drive for the rest of the day. We noticed as well that there was a pink string on a shelf below the upper ledge, we didn’t find the path there on the way down, but as we climbed back up another route was discovered and we got to adventure out, and right behind the waterfall itself. A really unique and special experience on a road that is very much the beaten track. This waterfall isn’t marked or advertised from the road, and that’s due to the danger of the area. There are no viewing platforms with fences or even well marked trails, and at the bottom the wet rocks and mud make the terrain treacherous. It is clear why Parks Canada would want to send hoards to this location. 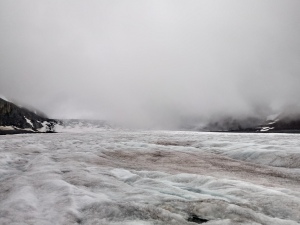 Not much further North is the Icefield Parkway Discovery Centre, the base from which the Glacier Adventure tour runs from, and the access to the Glacier Skywalk. As we had free passes for these activities it would have been silly not to take advantage, so we did. Overall the experience was positive, but also underwhelming. After queuing for some time we were loaded onto a coach and driven 10 minutes to the transfer station and switched onto a all-terrain six-wheeler bus, which drove us another 20 minutes onto the glacier itself. There is a steep section which may thrill those under 10 or over 80, but was really a bit dull. The guides kept the information flowing, and did a reasonable job of entertaining, although I was certainly close to sleeping on the return trip. 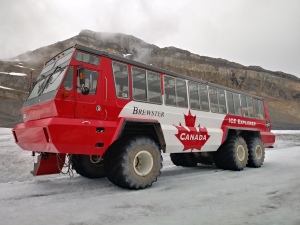 Once on the ice, you’re allowed to hop out, but in typical over-touristy fashion you cannot leave the marked area, and it’s all gritted and safe. I imagine they’ve had a lot of accidents in the past, so just being cautious, but it kinda sucks. The glacier is, well a huge slab of ice, and the area you are allowed to explore is just flat and featureless, it’s clear that they know it is as well, as you have a short time, and they leave out Canadian flags for you to pose with, so at least it’s not just a total snap n run. Still, at the end of the day, it’s a big sloping piece of ice, I’d recommend saving your money and walking up the base of it, you’ll get views just as good and save yourself some time and money.

Included in the price of the Glacier Adventure, is of course, the Glacier Skywalk, a glass platform that juts out over the valley offering some very average views in both directions. Below you the valley wall drops away a little before becoming a gentle slope. The good thing is that it’s not high enough to give anyone vertigo, the bad thing is that it’s really not very high at all. Again pretty unimpressive, you’ll have a quick stroll and be back on the bus again in no time. There is no public car-park for this, so if you’re dying to give it a try, you have to do the full package with the Glacier Adventure.

One thought on “The Road to Jasper Pt. 1”