So, a trip the really didn’t go according to plan. A trip that took me into the US and (thankfully) back out again. A trip that decided my next home. 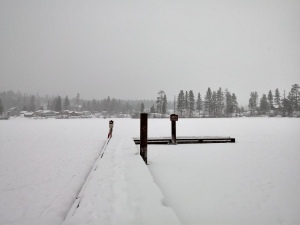 A friend of mine was due to fly into Vancouver, and make her way over to Sun Peaks, but due to Visa issues, she got stuck in the US, which meant driving down to the middle of Washington state to pick her up, and of course a big change in plans. We had arranged to go to through to Banff via Golden on the Highway 1, surprisingly this was the only destination we missed, as instead we drove through to the Idaho panhandle, then up along the Columbia Valley and into the Banff national park. From there I dropped my friend in Calgary and swung down to Fernie to visit a couple friends for a few days until onwards up past Kootenay Lake and across to Nelson, before finally heading home.

So the drive down into Washington was quite pleasant, the winding road through the hills gave plenty of impressive vistas, the occasional valley view and even a frozen lake or two (although by the end of the trip, frozen lakes were not so special) My destination that day was a small town, the last stop heading north in the valley that the US Greyhound would take my partner in crime. Omak is a bit of a nothing, but it did have a pretty cute espresso shop with some friendly locals and a cool bar and some great nachos and the all important travel essential – free wifi. From the comfort of our hotel we made some quick decisions of where to go next, main priority was to get into some snow. 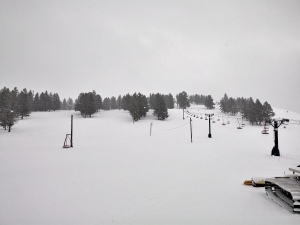 So snow was where we went, into the hills East, heading in the right general direction but taking the scenic route. Firstly past Sitzmark Ski Hill; and is ‘hill’ the right term. One chair, about 200m long, but offering single rides for only $8. A tempting visit, but when you can walk up in 10 minutes to a somewhat lackluster view it seemed a little unnecessary. Next up was the ‘ghost town’ of Chesaw. Surprisingly lively for a ghost town, I’d say it was much more ‘living’. The Curlew State Park was the next frozen lake we saw, pretty flat, pretty white. Crystal falls were definitely a step in the beauty category, the frozen waterfalls glittering in the sun as it broke through the clouds and trees. We took some time here to really explore here, climbing up on the snow covered rocks and getting the perfect instagram pics. It’s always entertaining watching people who have never been in snow before, cautiously stepping through, slipping and sliding as they go.

Our last destination for the day was a lake resort we found online that had a rather impressive special on. A nice lake front room with fireplace and all and $50 dinner credit included. This meant we ate fancy that night, a spectacular Beef Wellington and a two thumbs up rating for the Hill’s Resort in Idaho. After a good nights sleep, and some good news on the visa front, we started to head up and into Canada. This day was a pretty long drive, so no stops on the way except for a cheeky bite at Denny’s to tick an item off the list for the tourist. Arriving in Banff we started to realise how cold it was, having to layer up extensively just to step out of the door, even though we were already wrapped up from the snow in the US. A easy meal and an early night to prepare for a solid day of exploring the National Park.

One thought on “To Banff and Back Pt.1”