In October I moved to Canada, it’s been 6 months now and it’s going great. 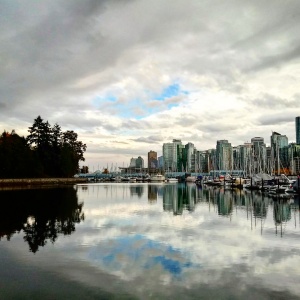 I flew into Vancouver airport October 20th, and was whisked straight into the downtown, My first taste of a Canadian HI hostel, something which becomes more significant much later, and the infamous weather of Canada’s’ West Coast in winter. It’s rainy, and when it’s not it’s cloudy. The city is fairly unimpressive with very little to show off, especially compared to the historic European cities I’d spent the last two summers bouncing between. What it did have was a vibrant nightlife and some impressive food. I’ve been told that the views of the mountains are spectacular, however the clouds really got in the way that.

One thing I did like about the city, is how easy it is to get out, maybe not when driving East, but South and especially North have pretty immediate access to the suburbs and the US or the mountains respectively. Within 20 minutes of downtown is the base of Grouse mountain ski hill, and about 5 minutes before that is the Capilano Bridge. Definitely a bit of a tourist trap, but at only $20 and blissfully quiet in the fall (Autumn) it’s a good little excursion out from the city. There’s enough to keep you entertained for an afternoon, even in the overcast weather. I wouldn’t recommend in the rain though. There’s a good few photo spots, and some lovely walks through the woods along with a little native history and the story of the suspension bridge itself.

Further out from the city is Squamish, not a huge place, but a great stop along the road up to Whistler especially if you fancy Mexican or fried Chicken. Mags99 is one of the those delightfully North American style places that will never be replaced. Loved by the city slickers and ski bums alike and in the perfect spot between two West Coast hot spots.

We weren’t aiming for Whistler though, instead we pulled off early to take the walk down to Brandywine Falls. Sounding like a Lord of the Rings location, it is an impressive waterfall with great viewing, and for those a little more adventurous the chance to go literally off the beaten track and take a walk to the base. I’d recommend shoes better than Vans, but we survived. Getting close to the falls is a challenge though as it kicks up a lot of spray and as soon as you’re within 50 meters you’ll be soaking wet. Still well worth the scramble for the epic views.

There’s some interesting spots in the city, a few listings in the Atlas Obscura which are worth taking a peak at, but as with so many North American cities it’s charm lies on the outside, in the impressive landscape and the activities that that allows.