After my trip around Rhodes, I tasked myself with finding my way into Turkey. I was very keen to see Istanbul but thought it would be nice to take the scenic route. This meant taking a couple of ferries, one to Kos, and the next along to Bodrum.

Leaving my trusty quad outside the shop I’d rented it from in the early hours I made my way to the port, and found it easy enough to find the right boat, buy a ticket on the quay and jump on board. Several hours and one nap later I arrived at the island of Kos. Quite striking on arrival thanks to the impressive fort built on the harbour side. It also had a wonderful greenness to it that was missing from Rhodes. Even a famous tree, supposedly the tree under which Hippocrates taught students medicine.

I wasted no time and paid the reasonable price for entry into the castle. It’s probably more impressive from the outside, but still nice to have a look around especially as I had time to fill. There’s nothing in there other than walls, but having a clamber around is entertaining enough. It was easily the highlight of Kos town though, and it would’ve been nice to spend a little more time in there.

After leaving I strolled through the town, plenty of tacky looking party bars offering various drinks offers, and lots of restaurants well stocked with English food. Have to admit was a surprise at first, but as the town was explore, more and more English accents were heard. There’s a small Roman amphitheatre out the back side of town, small but in excellent condition and free to have a look at. Worth the walk out if you have some time. A couple other little sights, temples, gates and walls make the town a little more interesting, but only a couple hours after arriving I was ready to head on. I got a tasty breakfast and prepared to wait for the next ferry. 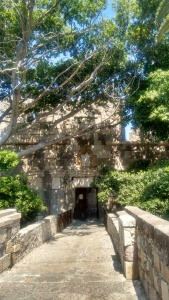 Bodrum also has a castle on the harbour side, but with a much higher price tag I decided to skip it. How different can another fort be? Winding my way through the packed market streets and long lanes of tourist shops hammered home that this was not an authentic Turkish town at all, but a tourist coastal resort. My hotel was hiding on the hill up behind the main strip, quiet but surprisingly big, the rooms were comfortable and it worked well as a base for the couple days I was there.

That evening I strolled down to the waterfront, the over-priced restaurants crowding the edge of marina, but if you head back just one street, the view isn’t so fancy, but the food and the service more than make up for it, not to mention the price. A couple of shops caught the eye, not all the usual tourist affairs, but there’s more than enough places to get lame souvenirs and knock off high street brands. One shop was an agent, selling the local activities, and after collecting some brochures I committed to a boat cruise and a Turkish bath experience, far cheaper than I thought possible, to good to be true?

I’d seen a few cheesy pirate themed party boats, and I made sure to check that I wasn’t on one of those, but promises in Turkey don’t always work out, and after boarding the Barbossa I found a nice seat away from the pumping dance anthems and had a nice read. The boat stopped frequently to let us take a swim, although each stop was very much like the other. Lunch was served and was perfectly reasonable, but the return journey was the most interesting, a stop at a cave, said to be the bathing spot for Cleopatra with cleansing mud. 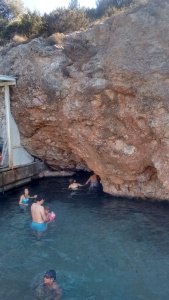 So pay a little extra and swim inside the dark cave, rocks and mud and plenty other people to trip over as well, smear yourself with some mud and feel the healing effects. Not a life changing experience, but quite amusing. There’s a trough outside filled with the mud, making it nice and easy to cover your whole body, and of course get some selfies as it dries. We were blasted with the hose before we could get back onboard and then the big surprise happened. 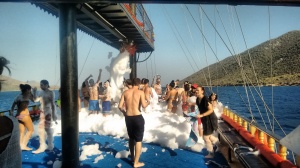 The dragons head mascot on the top deck starts spewing foam from it’s mouth, almost covering the whole boat. The music is pumped and the boat is now a foam party. A surreal experience and certainly a surprise.

Once off the boat I had my transfer to the Turkish bath, where I bath, got scrubbed roughly by a big Turk and felt pretty good about it afterwards. The whole thing took maybe 30 minutes, and is something that’s well worth experiencing. Perhaps a more expensive and fancy facility would have felt a little slicker, but I do feel as though I can tick that experience off my bucketlist.

Overall I found both Kos and Bodrum far too touristy for my liking, neither town had anything to offer other than pricey restaurants and souvenir shops. The weather is good though, and I can imagine British people enjoying a week of sun and sand in either easy enough though, but I was glad to be heading to the airport to fly over to Istanbul. The upside though, I got to try my first genuinely Turkish Turkish kebab.