This island sits only a short ferry from Athens, and if you’re looking for a break from the big city, you’ll struggle to find a better destination for a couple days.

I decided to explore the island after a shining recommendation from a friend, and I’m grateful for it. It’s easy to get to from Piraeus (Athens main port) with the fast hydrofoil ferry (16EUR each way, 20mins) or the slow one (12EUR return, 1hr30mins) leaving approximately hourly. Once on the island I found myself a nice lunch – there’s some great places just one street back from the seafront that are excellent value. You must try a Aegina Salad, similar to a Greek one, but with pistachios, the islands speciality crop.

With a full belly I set out to explore, renting a moped from one of the only two places in town I took the coastal road around to the north side, dipping through pretty little harbour towns, past stunning quiet beaches and over gorgeous headlands. The breeze thanks to the bike kept me cool, although I was on and off the bike plenty of times, grabbing some snaps or just having a quick stroll through a village.

There are a few points well worth investigating while on Aegina, a collection of old churches scattered on a hillside overlooking the main valley in the centre of the island, but when scaled to the top offers views down to the northern shores as well. Despite the heat the climb wasn’t hard, and gave me the adventurous kick I love so much. Each church had recent dedications, although as I reached higher it was clear that people preferred the lower ones for their visits, not wanting to over exert themselves. 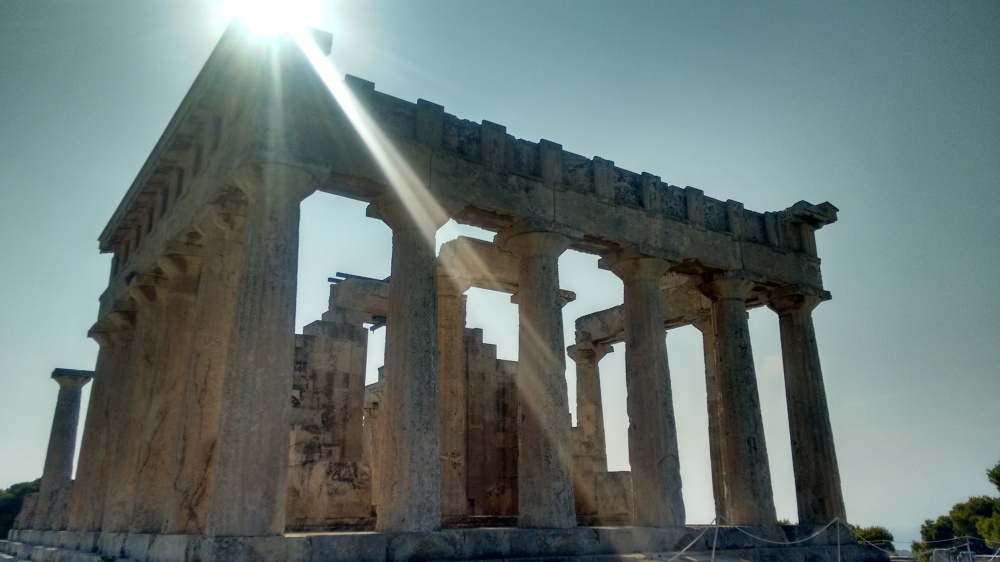 Next on the list, and only a minute down the hill is the Monastery and Cathedral, while the monastery is a rather sensible settlement, the cathedral is quite impressive, with a large dome framed on either side by impressive towers. The eastern influence is truly apparent with the architecture in these holy buildings XXXX. My last stop before I found my accommodation was the ancient site of the Temple of Apollo. A decent amount still remains, with enough ruined that it looks well used as well. The majority of the coloumbs are still standing, along with much of the roof structure. You can see where much of the base structure was built, and the useful signage means it’s possible to build up a pretty decent picture of what it would looked like when still functional 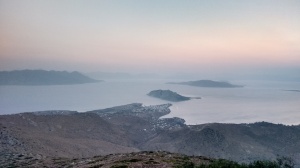 I was staying in the town of Aegina Marina, on the eastern side of the island. Usually I don’t name the hostel/hotel I stay in, but the lady that runs the Flora Rooms was so lovely they deserve a mention. A top floor room with good views of the bay, plus homemade lemonade and cookies on arrival made me feel very welcome indeed. The village is rather basic, mostly tourist restaurants and shops, but nothing here was overly expensive. The vibe was more family friendly than the better known islands further south, no late bars, and certainly no clubs in that part of the island. I asked about a good place to watch the sun set, but the only option was to drive back to the main town (the big city as the Marina locals call it). But after some research I found that the highest mountain on the island was climbable, and would take about a half hour from the base, which was a half hour drive away. I had nearly two hours until sunset, so after a quick shower I got a shuffle on and headed south. 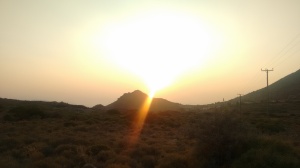 Google estimated a 30min drive, but I feel Googles vehicle is not an underpowered, elderly moped, so I arrived with barely 25mins to make the climb. The way was rocky for sure, loose pebbles, shingle but nothing too steep. I hustled up as fast as I could, soon making my shower somewhat redundant thanks to the sheer amount of sweat I shed. I climbed, constantly watching the worlds finest countdown over my shoulder, hoping that I would make it to the top in time. 14 minutes after I started on the trail, I reached the summit.

That gave me nearly 10 mins to grab as many snaps as I could, and enjoy the view in all directions. It was a glorious sunset, made so much better by my solitary climb, I savoured it as long as I could, but knew it would start getting dark soon, so had to make my way back down again. Biking back home with two headlights pointing way out to the sides is definitely not recommended, but finding an appropriate challenge and completing it is the most rewarded experience I know.

I congratulated myself with fresh swordfish steak at one of the restaurants opposite my hotel, not worrying about eating alone, surrounded by families and couples. Retiring to my room, I slept very soundly that night.

The next day I set off to explore the little island off the southwestern corner, Moni. Checking out early I said goodbye and hit the road over to Aegina town, before cutting off down to Perika. I found a nice spot for breakfast as I’d heard the beach bar on Moni was somewhat overpriced – although this isn’t surprising as the island is totally uninhabited. The beach you arrive into is busy with tourists, with plenty boats in the bay, but it’s not hard to get away from them all. 5 minutes away is beach after beach, untouched and unpopulated, perfect for a truly relaxing experience on the island.

Moni is an uninhabited island, but there are some local residents worth finding. Peacocks and deer both thrive, but the peacocks are certainly much easier to find. The slopes near the main beach is full of them, scratching and pecking at the dirt to find food. It seemed likely that they’d be having a feast once the last of the people had left, hoovering up all the leftovers and dropped crumbs. I didn’t see any deer, but I hope to head back one night and camp out, hopefully then we can see a little more, and maybe climb the mountain there as well. 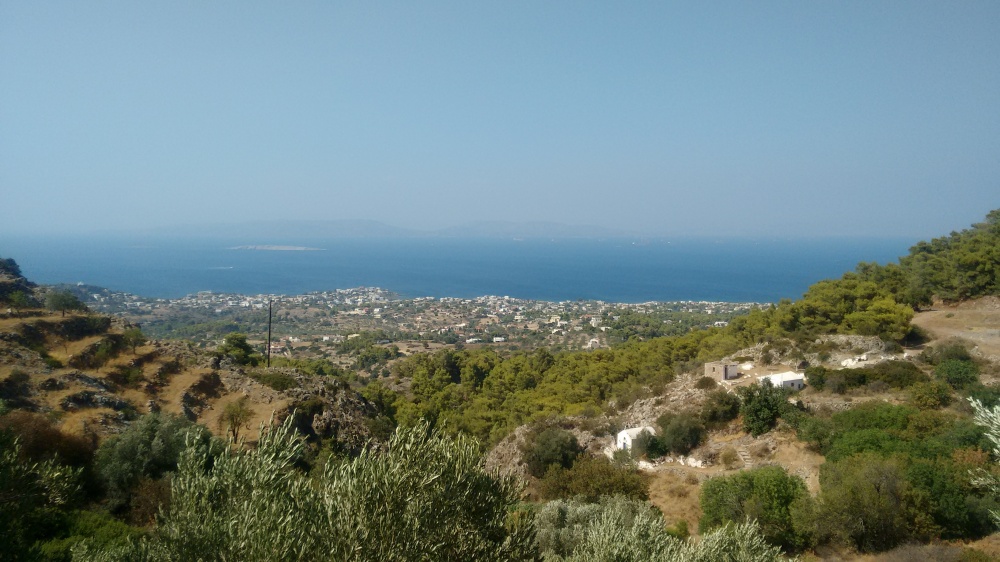 Back from Moni it was a simple case of finding some lunch, returning the ped and jumping back on the ferry home. Two islands, well explored and I was ready to face the city again.