I left Thailand from Pai, taking the slow boat into Laos, a popular way to across into the northern end of the country. You’ve got to get lucky with this boat, as the people you meet are likely to be your friends for the next couple of weeks. 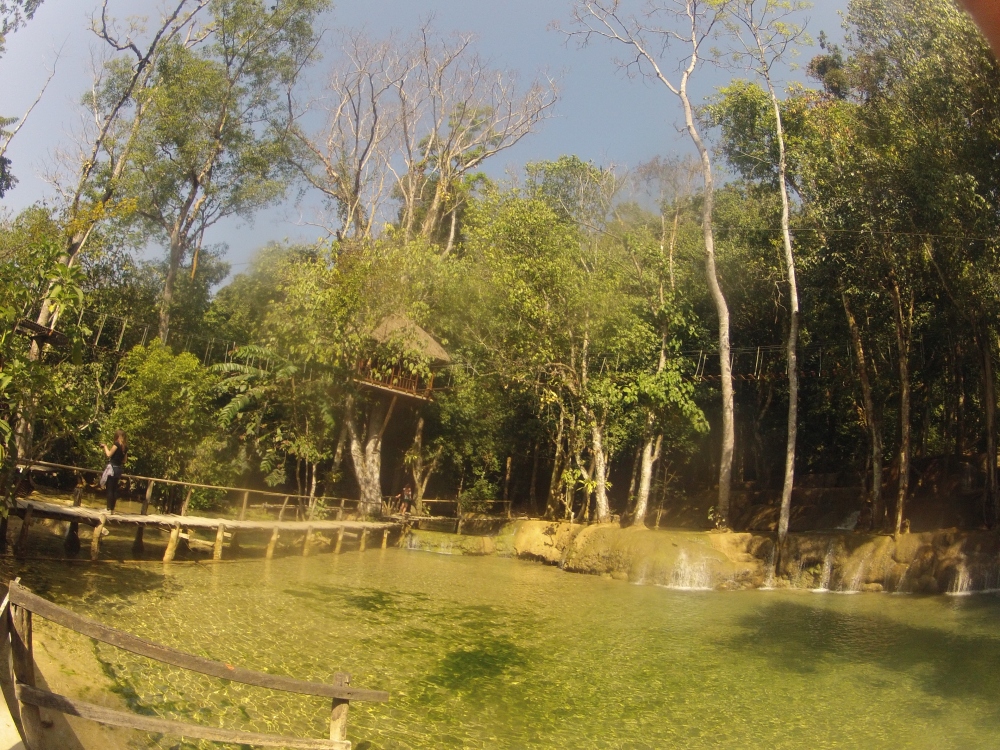 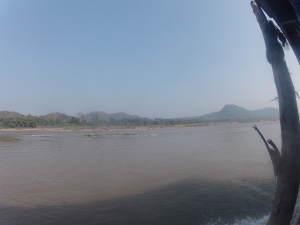 So getting the bus and boat over and into Laos is ok, don’t expect luxury, and don’t expect much fun, it’s all very basic and the ‘slow’ part is correct. The bus over to the border is pretty standard, after which you do all the visa stuff before shipping down river to the town to sleep your first night in Laos before the second half of the boat ride. Don’t get duped into spending any extra money on the hotel at Pakbeng, they are desperate to eek every penny from you, and don’t care about what happens to you down the line. Those that paid the extra wasted money on rooms hardly any nicer, even if the one I slept in ranks in the bottom 5 of rooms I’ve stayed in. It’s an early start the next day, but the little town you stay in is not nice, and I was glad to see the back of it. 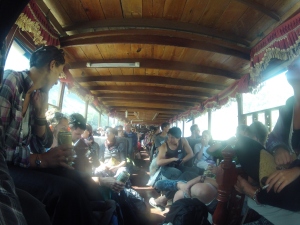 It’s a good thing you’re going down river otherwise the boat would hardly move at all. The views are pretty good as you go, but it’s not enough to keep you from getting bored for 5 hours. Find somewhere to sit, near some people the same age and that speak the same language and prepare to learn everything there is to know about them. Thankfully my crew were lovely, and we bonded quite nicely, mostly English with a couple of exceptions. With the hard seats and no chance to nap, we were all grateful to reach Luang Prabang and head to our hostel – Lemon Lao/Spicy Lao. The hostel was supposedly started by the same guy that ran the ‘spicy’ hostels in Thailand, it was rather clear why he’d given up on this one (if he really had anything to do with it). While the staff was lovely, and most of the place was pretty chilled out a friendly, it was freezing cold. There were only a few rooms with windows and doors, and those that did were loose or broken, which wouldn’t have been a problem if it wasn’t winter and very cold at night. 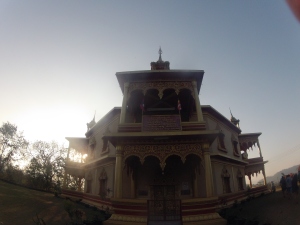 Luang Prabang was actually a great little city, with some lovely French Colonial architecture and the whole town had a strangely European feel to it. Excellent markets and some some great bars made it a nice place to spend a bit of time, just be a little careful of the table football sharks, they’ll let you win a game, then start betting and win so easily. 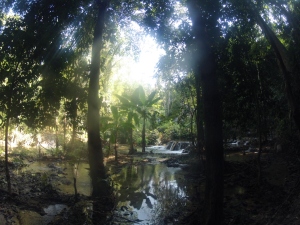 The best bit of the town is the waterfalls nearby, the first day we checked out a complex which has plenty of falls and one area that has featured in a thousand Facebook profile pics. Kuang Si Falls has a beautiful green water pool, and a great waterfall flowing in that makes it just perfect for posing in swim wear. There’s also a rope swing that has plenty of people queuing to use it, but it’s all very friendly, and there’s lots of people having fun, so the ‘Oooohs’ from the crowd when someone belly flops in is quite impressive. Of course there’s a few trying flips and things, but mostly everyone is just happy to be there. Thankfully the sun warms the water nicely, and the cold of night is long gone. This site also had a little bear sanctuary, and being a big fan of bears I found this rather pleasant. Of the zoo style places I’ve seen this seemed to be one of the nicer, with no metal cages and plenty of space for the animals. Apparently all of the bears here have been rescued from farms or zoos, so support the charity and help some of these awesome creatures 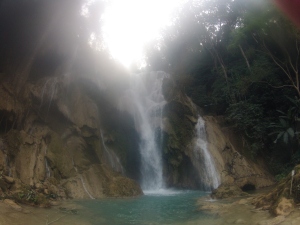 The next day was a another waterfall network, Tat Sae Waterfalls, not so great for swimming and diving, but we still found plenty of spots. The most fun at this one was finding the highest place we could jump from. Certainly lots of adrenalin pumping as we clamber up platforms and over rocks to the high perch, only to plummet straight back down into the water. You need to be careful where you land though, the depth isn’t obvious and I’m sure it would be very easy to hurt yourself if you mis-placed your jump. 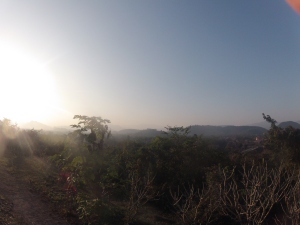 One of the most interesting things about Laos is that they have a curfew, everybody must be home by midnight, so everything shuts at 11.30. There is one exception, which was the bowling alley. The tuk-tuks line up outside the  bars in town ready to take westerners out of town to the mythical bowling alley, which continues serving until the last people leave. There’s not much music, and absolutely no atmosphere, but the venue serves it’s purpose – allowing tourists to keep drinking. After a couple of games the novelty wears off, and people start drifting home, only the hardcore and the desperate stayed very late here.

The food here has a outstanding mix of French and Laotian influences, so it’s possible to find crepes and croisants along with noodle and rice dishes, just be aware that if it looks too nice, the price may be too much. Some good views from the town across the Meekong make this a much nicer introduction into the country than the previous stop. 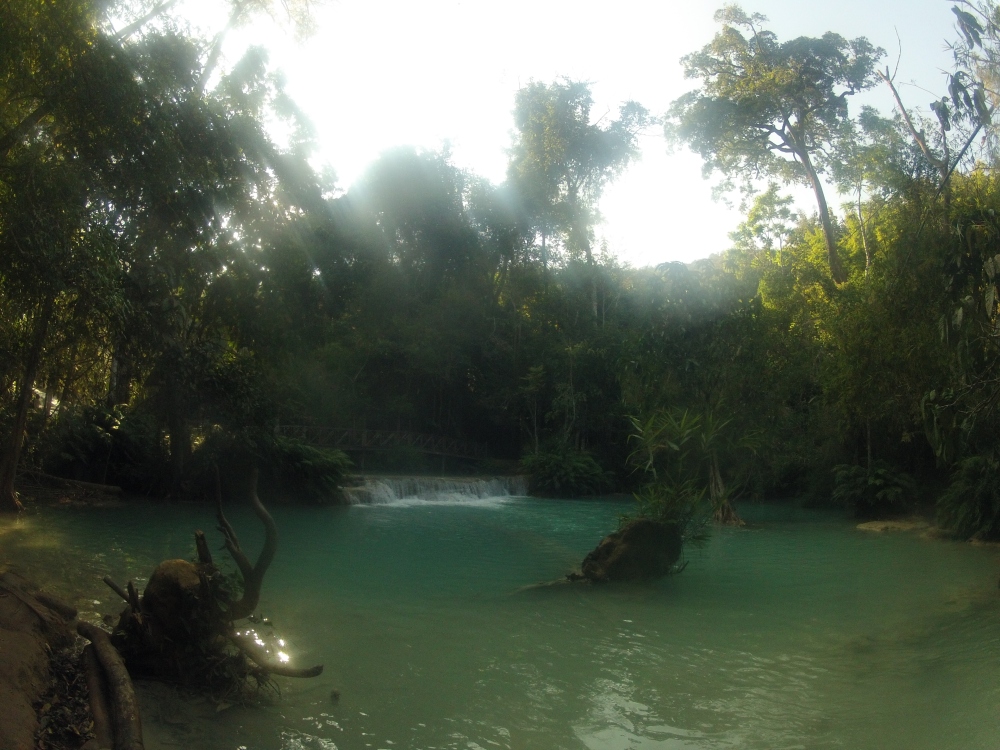 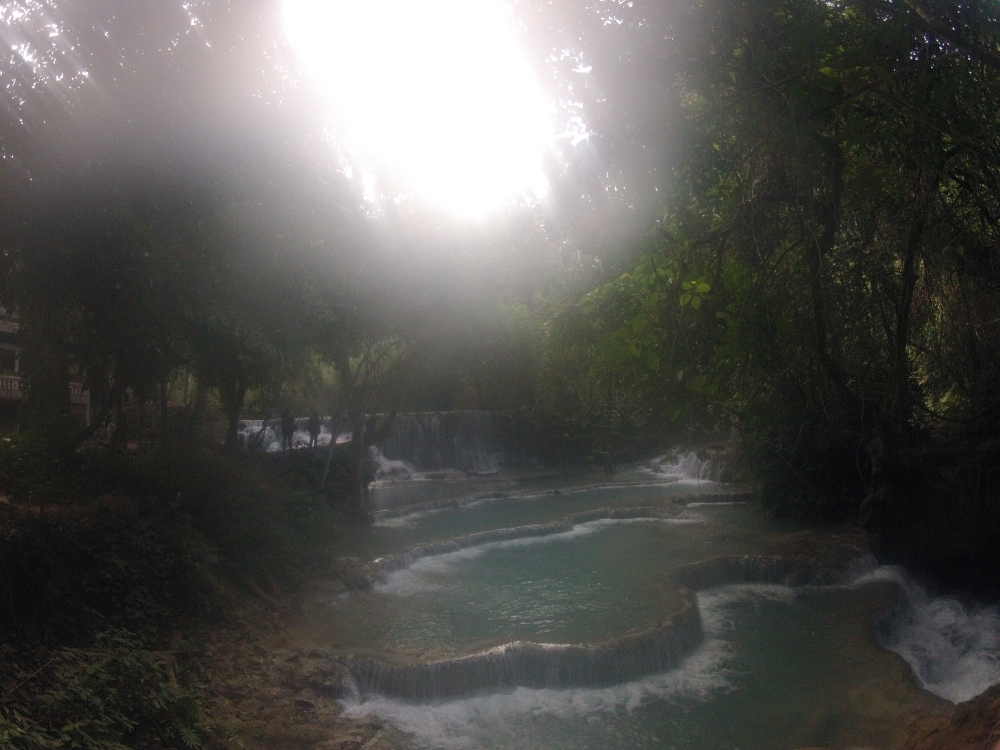