So, another long and uncomfortable bus over to Phnom Penh. 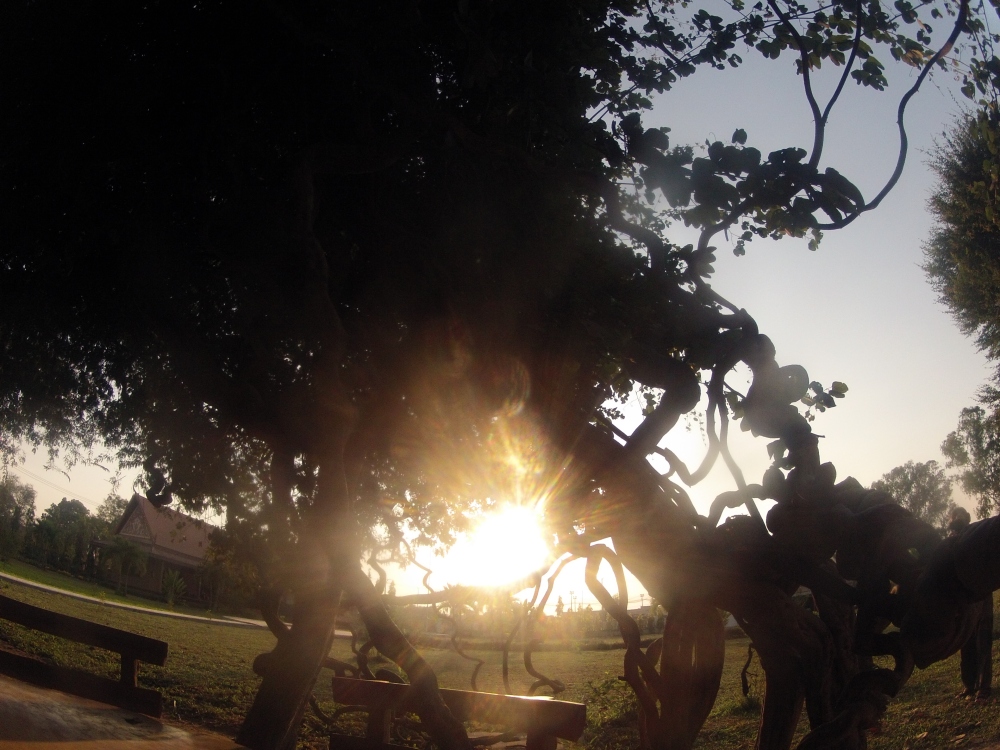 However, this one had to be one of the nicest. The coach had beds in it, admittedly they were slim and you had to share, but thankfully I had someone with me that I didn’t mind sharing with. There was a tiny little TV in there and a power supply, so we could even watch a movie or two. It still wasn’t comfy, but once you’re asleep, you really don’t mind.

We had a really nice hostel (11 Happy Backpackers) in the city, with a very cool rooftop bar, and some great food. I really loved the pumpkin soup, I haven’t had any since that beats it. Phnom Penh isn’t really about the night life though, it’s a much more serious place to visit, as the main attractions are the Tuol Sleng (S-21) Genocide Museum and the Killing Fields. As the capital from which Pol Pot ruled, the city was the site of some incredibly horrific events and places.

Tuol Sleng museum was originally a school, but when Pol Pot took over he began to change things, education was not approved of, so many schools closed, often to be re-used for other purposes, in this case as a prison. The treatment of the prisoners here is what is most shocking, and as you explore the site you can see the appalling conditions they were kept in. As you continue through the museum you come across some of the smaller and more cramped cells, knowing that these people were rarely allowed out, often denied food and punished heavily for any misdemeanour. The last part includes some of the devices and techniques that were used on the inmates, things that I will not speak about here. While very sad and upsetting, this shocking example of Cambodias’ history is a must see, to understand what the people have been through, so recently and yet are still smiling and living their lives in such a positive way.

The Killing Fields, popularised by the movie of the same name is another must see in Phnom Penh, It is an incredibly well kept site, with an excellent audio tour that takes you through the now peaceful site that is grave to countless Cambodians massacred as part of the cultural cleansing. The tour explains the various areas, starting with relatively innocent stops like where the barracks once stop, and the guard houses, until you find yourself at the first mass grave. While there are few bones uncovered, you can see where rags and scraps of clothing have surfaced through the soil, and tourists have tied these to the fences and trees in the area. Wristbands from all around the world are hooped over posts marking out the edges of these graves, and despite the thousands of dedications, it is believed thousands more were murdered.

There is a small lake a little away from the main site that allows tourists to stop and reflect on the horrors that had happened there, although it is hard to comprehend how, especially so recently, something so disturbing could have happened at all. The hardest part is the infant grave, and thinking of how innocent children and babies were taken and killed, more like cattle than people, before being dumped into another mass grave. The final stop of the tour is the Stupa, filled with the skulls of victims, hauntingly beautiful as the architecture and the interior clash. We visited very late in the day, just before closing so it was very quiet, and very peaceful. It seemed almost silent, except for the audio tour that we could pause at any time.

The next day was rather more cheerful, exploring the markets and finding replacement shoes and just enjoying the city sights. We also took a trip out to the local wildlife park, the Phnom Tamao Wildlife rescue centre. South East Asian zoos do have a bad reputation, but this example was very nice; large open spaces and not a huge amount of tourists, all the animals were rescued from other zoos, or from private collectors, very few were taken from the wild. Certainly the animals looked healthy and happy, and checking out the various Asian bears was impressive, they do miss the Pandas, but when they’re so expensive it’s understandable.

The last thing I did before jumping on the next bus was to have a tooth pulled out. It was cheap, easy and quick (and I got to eat lots of pumpkin soup) so good in fact I went back not long after to get two more out. Goodbye wisdom teeth.

Our next destination was the infamous Sihanoukville.