Second week out with Wasteland ski, and we had Glasgow, Cambridge (or one college) and Plymouth in Alpe D’Huez.

I was one of the Plymouth coach reps, which meant a wonderful long trip out across the UK, over on the ferry and southwards through France. The journey isn’t half as bad as you might think, with people getting to know each other, making new friends and playing a few games along the way. It’s easy to sit down the front miserable and bored, but if you make a bit of effort (and sit nearer the back) it’s really not so hard to while away the hours with stories of freshers weeks and some sneaky drinking games. 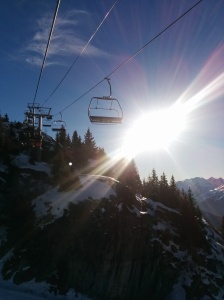 The resort itself is mostly compacted into a central triangle, with a few odd areas a little walk away. Plymouth were over in Les Bergers, one of the offshoots which meant a mission over to the bars on the far side of town. The main bar area is just a stair set away from the main high street, and hosts a couple of great bars and two clubs. The access is a little tricky especially for drunk students late at night, or with any amount of snowfall, but thankfully no stair related injuries throughout the week. Some of the bars in resort are English run, Smithys was a favourite, which meant no hassles from either side of the bar after another order gets mixed up, and the bouncers are a little more manageable when it comes to unruly behaviour. Mostly they know what to expect when 250 students get booked in for the night. That said, the French run bars were very pleasant as well, one even giving our poor night-duty reps some hot chocolate to lift temperatures and spirits. The only troubles we had were in the late night clubs; usually unbearably expensive and filled with only the drunkest of student, the often moody staff and even moodier bouncers are something to be wary of.

The mountain itself was suffering from a lack of snowfall so there wasn’t any powder or off-piste to speak of, and the park was disappointingly small. A few rails and boxes and three small kickers were all we had to play on. The rideable area is a good size though, a little larger than most, but with no extendable lift-pass options (although a day pass to Les 2 Alpes is included in most passes over 5 days this isn’t accessible by skiing) it’s easy to explore the entire area within a week. The pistes are well varied and the lift network is easy to navigate, so long as you didn’t hit the bar too hard the night before.

Over the main ridge are some excellent long runs down to the lower villages which offer less ridden snow and less people on the hill. Both Vaujany and Oz have nice options for food and drink, although not to much to party, so great to visit in the day time, but be aware of the last chair, as a bus ride back is a lame way to end your day. Auris is even quieter, mostly due to the awkward way to get across. The most famous runs of the resort however; the ‘Tunnel’ a run which leads around the back of the highest peak and then right through the ridge before heading down a steep black. This was closed the whole week I was there this year but from memory of past trips the run down was full of moguls and has a nasty flat/uphill right before it joins the main runs again. It would be magical to get first tracks down there, but otherwise it’s skier territory, and even then you’ve got to know your lumps. The ‘Sarenne‘ is a rather different affair, and is one of ADHs’ main boasting points. It’s a crazy long (16km and the longest in Europe) black run from the top of the glacier right down to the valley below the town. It has hugely mixed reviews and is notoriously flat in places, although if you’re a confident rider there’s no reason it can’t be hit. Just try to do it in less than 20mins so the locals don’t sneer to much.

One day was spent over in Les Deux Alpes, which is included in the lift pass. Again, a great little resort and one that feels a lot more boarder friendly. The town has a more laid back and steezy vibe, rather than the pretentious stuck-up vibe you can find in some resorts. While the snow wasn’t good enough for provide runs back to resort, the snow on top was plentiful and good to ride. The park here is huge, with plenty of variety even in the smaller parks. The smaller riding area felt a bit restricted, although there is more accessable if you’re willing to put the effort in. Awesome for park people and true snow homies, although not so much for the families and larger groups looking for a little more variety.

The resort has great bars for the students, and given the unfortunate snow conditions around the alps, this resort did a great job hosting so many, and without Glasgow hogging up all the central hotel space, the town would have been ideal. I’d love to return when the snow has improved, and I hope I will be back soon with Wasteland.

One thought on “Alpe D’Huez with Wasteland Ski”