Val T has some great runs, and while not all of it was open for the season just yet the snow had covered most of the runs very nicely. Heading over the ridges toward Orelle was a treat, with a lovely couple runs straight down into the valley. The blue run Gentianes which criss-crosses a red run down was especially fun. While the red powers straight down the fastest route the blue meanders through some more interesting terrain meaning lots of little jibs and hits alongside the piste.
Be careful heading back into resort though, a lot of the runs from the right side (of the piste map) lead back through the flat of doom, just past the excellent apres bar/festival venue 360 is a gentle slope down to a nice long flat. Most people stall here, including the skiers so be sure to go the high side if you can, or straight line it as long as you dare. Having to unstrap just ain’t fun. 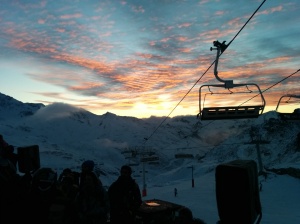 We didn’t have time to explore the full 3 Valleys which we had included on our pass, but the size of Val T kept us happy for the week, although that did include a day off due to bad weather, and quite a few days taking it easy after/before a heavy night.
Each night I completed my room rounds and participated in the evenings festivities, which mostly included drinking and dressing up. I didn’t dress up so much as I had to wear the all-powerful rep jacket, but I still got involved and made sure everyone had a good night. I also had a night duty shift which means staying sober (no issue for me) and taking care of the drunken students on the way home. Mostly this meant telling people to be quiet, but on some weeks night duty reps have been involved in breaking up fights and escorting super drunk folk home. Thankfully none of that for my first week.

The other points to note were the Valley Rally, an infamous and mostly banned day of dares and challenges that usually lead to nudity and drunkeness. This concluded at the 360 bar, and lead into the mountain meal. The meal was a meat fondue with copious amounts of wine and then the dreaded ski down in the dark. Everything went surprisingly well and apart from a few skis left behind most people had their own skis on at the end of the night.

I loved the week in Val T, and even the coach home seemed to fly by. I can’t wait for the next one in just a few days, and I recommend anyone at uni to get involved in their tour. If you’re not at uni anymore, there are a few small group options you can book onto through wasteland, which are cheap and just as awesome. There’s also snowboard club UK which runs trips through Wasteland each year.