So on to the biggest city in the north of Vietnam, Hanoi. The second largest in the country, and the capital while the country was divided during the war.

There’s two little areas within the city that have a few hostels in each, the first is home to the Infamous Hanoi Backpackers, and Central Hanoi Backpackers while the other hosts the Hanoi Backpackers Downtown; a fancy new build with impressive bar, the starting point of the notorious bar crawl that sucks in pretty much all western tourists under 30. The two areas are a little way apart, but definitely within walking distance although getting from the last bar of the bar crawl back to the first area is a bit of trek.

I stayed at the Central Backpackers, but if you’re a bit of a party animal I’d recommend either of the others mentioned above. Both are run by the same people, are very western friendly and good places to meet other people. They constant run games and have fun little events for theitr guests, they also run their own tours, the Buffalo Run, which takes those that don’t know the real cost of things via a few stops down to Hoi An over seven days, and the much discussed Ha Long Bay Castaway Tour. This tour was something I’d heard about since Thailand, and the reviews are unbelievably mixed, from pure love to spiteful hatred. It’s the perfect trip for those that love to get very drunk and enjoy drinking games along with a bit of daytime adventure activities. I’ve heard horror stories that include the drinking of vomit, 6am shotgun beers, and forced drinking on those that could not handle it. I also heard girls complain that they were constantly sexually harassed by staff members. However, I have also heard people say it was the best weekend of their lives, so it’s a very divisive tour as far as opinions go. I choose not to go with them for two reasons; drinking to excess doesn’t appeal at all (as I’m straight edge I wouldn’t be drinking at all but being on a boat with those people would not be pleasant) and it’s at least two times more expensive than most other options. I have written up my Ha Long Bay Tour here (coming soon). 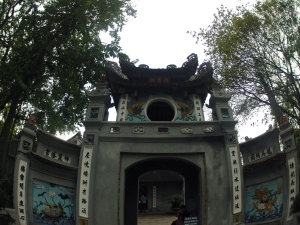 We had arrived in Hanoi with a little bit of extra time because I wanted to apply for my Chinese Visa while in the city, you can read my article on how not to get your visa here (coming soon).

While in Hanoi I had a very pleasant surprise; bumping into a friend of mine that I had lived with in Melbourne for some time. Simply walking past a restaurant around the corner from my hostel I heard a call, and was very happy to see Andy. This made our evenings out very entertaining, as we have one main thing in common, and that’s the meeting and chasing of girls.

Hanoi has a few little bits and pieces to visit, so over the course of a couple days we visited several of them. The first is the large lake between the two backpacker areas which is also used as a giant roundabout. On one side there is a bridge to an island on which there is a quaint little pagoda. While not spectacular it is a very popular stop and is worth a quick look. The city is also home to many churches as well as small temples, so a tour of this is possible if that’s what you’re into.

The Tomb of Ho Chi Minh is probably one of the biggest tourist draws I’ve been to, although we arrived too late to visit his body (something completely against his wishing when he died) the monument is very impressive. It’s something I wish I had seen properly and visited his body as well, although I’ve heard it’s rather disappointing an experience. 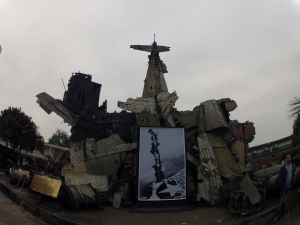 There is of course the obligatory War Museum, although this is more of a tribute than a complete museum and features just a few of the larger pieces in the courtyard of a small citadel style fort. Across the road from this is a statue of Lenin, a man who didn’t do too much for Vietnam directly, but apparently their love of communism was enough to erect the dedication. Finally is the old prison, which famously hosted John McCain the US Presidential Candidate.

Hao Lo Prison, popularly nicknamed the Hanoi Hilton is a very peculiar place to visit, and shows the way the Vietnamese will try to change history by showing us a rather false view of the Prison. The first part shows the horrific condition that the Vietnamese were kept in by the French Colonists, while the second displays the lovely conditions that the Vietnamese wish to show that American prisoners were kept in. This includes a rather basic but pleasant dorm room and lots of photos of US soldiers sharing happy times including having Christmas dinner and playing basketball. The Museum claims that the nickname Hanoi Hilton was because the conditions were so good. It is general knowledge that this is all propaganda and in fact the conditions for the Americans were similar to those of the Vietnamese during the French rule. Accounts of torture, and terrible conditions are rife amongst ‘guests’.

The city has plenty of great walking streets with market stalls and shopping littering the sidewalks, so shopping is easy and often tempting, and you can get pretty much anything you could want there. Overall it’s a pleasant city to spend a couple days in, although it gets a little dull if you’re there as long as we were.