So just the other day I went off to the glorious Swindon for training with the Pre-Fit Delivery Company.

These guys provide a genius service fitting ski and snowboard boots before the customers go on holiday, so when they arrive in resort all they need to do is pick up their gear. It saves loads of time messing around in resort trying to get the right boots (which is so important, especially for beginners, and skiers) and means the clients get the perfect size. 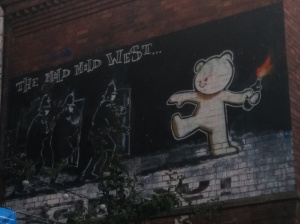 I met some of the team at the Wasteland training weekend, and they’re lovely folks. Seeing them again for this training session was good fun, and the day was well organised so we learnt loads in the short time. The team travels from group to group, mostly doing fitting session with unis but also families and other group travel organisations, doing the fitting sessions. Which means lots of traveling around the country for the team, and some good times partying while away. I only got a few shifts with them, as they had a good response of people wanting to work, but I’ll be off to Glasgow at the end of the month, and hopefully a little stop over in Edinburgh to see some family on the way home.

I stopped in Bristol either side of the day in Swindon, first night I caught up with some family, and second with a friend of mine, which meant a night out in the city. I’ve heard a lot of good things about Bristol, and it didn’t dissappoint. Certainly strong with the uni vibe, and very creative as well. We stayed at the Full Moon Backpackers, which I don’t recommend at all, except for the location, ate at the Pieminister just up the road which I do recommend and ended up in The Big Chill, listening to the Music Unis’ Jazz Funk Soul Society live music night. Lots of good tunes along the jazzy funky theme and lots of hipster students. The atmosphere was very nice, as was the bar and people.

In the morning I had a little time to explore, so we checked out some of the excellent graffiti, the charity shops and in the search of a snow shop found the city Art Gallery and Museum which I could have spent all day in. Unfortunately work was called from three hours away, so I had to head off, missing out on the HMS Britain, the Clifton Suspension Bridge and all of the many churches and cathedrals.

I can’t wait to head back, and I really think it’s worth a trip for anyone who wants to see a nice, but smaller city than London.