The last and final leg of my journey leads up from the South Coast and Durban, north towards Johannesburg, stopping only once at the excellent Drakensberg mountain range.

The Amphitheatre is in the Northern Drakensberg, a huge bowl shaped area of valleys, canyons and cliffs which stretch up to some of the highest peaks in South Africa. A incredible area of natural beauty this region could easily have been the back drop to parts of Lord Of The Rings, losing nothing to the New Zealand mountain ranges used, which is saying a lot, as I am a very big fan of the NZ hills. 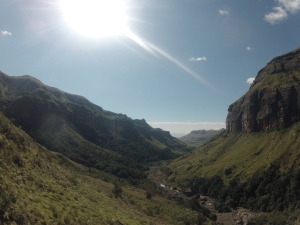 The Amphitheatre Backpackers was a comfortable and and friendly stop, if a little unsuitable for the typical idea of backpackers. While the rooms were comfy and spacious, they had no facilities for buying your own food, just a vague map with some unreliable bus times to get into the nearest town. They offered meals during the day which were fairly reasonable, but the evening set meals were practically Australian in price. After practically begging them to drive us to get something to eat that we could cook ourselves, we jumped a backie (Ute in Aus, or Pick-up in the UK) with a bribe to the driver who took us to a campsite nearby. He also took us to a local lady, who raided her own fridge to sell us some very fresh and delicious meat – perfect for the brai that evening. The hostel had some interesting facilities, included a freezing cold outside pool, bar, tv room, hot tub and, my favourite, a bouldering wall inside the bar.

The hostel ran transfers and tours to the mountains, the one I took was just a transfer to the base, from where we hiked up through the valleys and foothills, trying to get as close to the epic cliffs of the peaks as I could. The walk was a good challenge, constantly offering awe inspiring vistas, both up and down the gradient. Along the river bed the rocks made going slow, but as the path only went so far it was the only option. This was followed by chain ladders up sheer rocks to get around the semi subterranean rivers (which offered some very interesting sights). The further I walked, the closer I got, the steeper the river bed got, but the views were constantly impressive.

Unfortunately the inflated prices of the transfers and tours meant the second day was spent relaxing and exploring around the plains the hostel was set on, rather than heading to the top of the range. Coming to the end of a trip is always a tight time for those on budgets, but as this accommodation had realised it’s monopoly on it’s guests, they had clearly maximised their prices. The plains lead down to a pretty little river though, where myself and a couple others relaxed for the day before having seconds of brai’d beef.

From it here it was one more jump onto the Bazbus, straight to Johannesburg airport. Having seen the city on arrival, a second look wasn’t necessary, in fact the budget barely would have stretched to another night of accommodation. The same day I left the stunning Drakensberg I was flying back to the UK (after a rather long stop in Abu Dhabi (don’t sleep in airports unless you’re sure which time-zone you’re in).