So the rather unimaginatively named South Coast stretches on from the start of the Kwazulu Natal up until Durban, where it switches again to Zululand.

Only a couple of stops along this stretch for me, although there’a good few options for Bazbusers. Umzumbe was my first, and unlike the name may suggest, it’s much more westernised than places like Coffee Bay. The hostel I stayed in was charming, and gave me one last chance to catch up with the Swedish girls I’d been chasing since Oudtshoorn. Mantis and Moon backpackers lodge is charming and friendly, and really seemed to embrace the lone traveler better than most places. A few trips were available, although not running with so few people, the barman was friendly enough though, and kept me company the first night.

In the morning, I was fortunate enough to meet a nice Dutch couple who were heading off for the Oribi Gorge and let me  jump in their car, along with a German guy as well. Together we explored the impressive canyon, crossing the massively over-hyped rope bridge, and taking a look at the huge canyon swing. A shame it was closed for the day, else I think it would have been a must do for me. They also have SAs longest zipline, although that didn’t look so impressive. After a nice day exploring we headed back to the hostel, and I disappeared off to Durban. 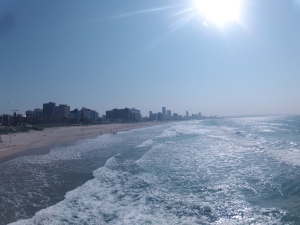 is well located for the party scene on Florida Road, one of the coolest areas of Durban, according to the hostel staff at least. It sure it’s fair share of western luxuries (McDonalds, KFC and all the rest) alongside a good selection of interesting bars. Exploring the city is a good way to spend the day, just be a little careful where you wander. The beach front is long and flat, perfect for a longboard, or bike if you fancy traveling a bit quicker and getting nice and warm. 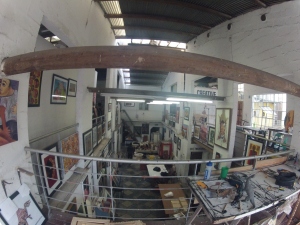 Similar to Cape Town, I got a good sense of culture while in Durban, youth art projects, both black and white influences being nurtured and given a chance, with galleries and projects open to the public. There’s a touch of history here and there, and the incredibly cheap maritime museum was an odd, but entertaining little stop. That evening, through a mistake at the hostel and the World Travel Conference happening in town the next day, I was left without a bed for the night, thankfully my faithful friend Tinder was at hand, and I spent the evening with a wonderful local who took me to some of the hidden spots away from Florida Road. We also saw an art/music minifestival at the nearby Uni campus, lots of alternative types wandering about and some very impressive music being played as well, including a young man playing acoustic guitar like a piano. Not like pressing the keys, but simply playing so many notes it was hard to know how only six strings could make such a sound. And the reaction he got was very good, rather than the UK where something like this would be walked past or complained about as ‘too loud’ the students lapped it up.

So after a comfortable night in another bed, I arose early to jump on yet another bus out of Durban and towards the Drakensberg.